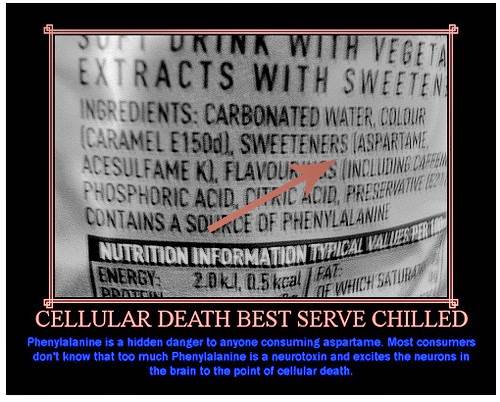 Have you ever used the sugar replacements: NutraSweet, Equal, and Spoonful? If so, then you’ve consumed aspartame. At least one person out of 7 in the world today consumes aspartame that is also used in countless number of food products and drinks, and even in some health supplements and pharmaceutical products. A majority of these consumers are unaware of any side effects that this chemical might be exacting on their health.

Aspartame is a combination of aspartic acid, methanol, and phenylalanine. Each of these three chemicals carries its own health related dangers and side effects. Sometimes, aspartame is named as ‘Acesulfame Potassium’ on products which means the same synthetic chemical.

Aspartame releases a neurotransmitter called aspartate during digestion. This neurotransmitter is allowed to cross a special barrier called the blood-brain barrier [a membranic structure that acts primarily to protect the brain from chemicals in the blood — wikipedia] which is totally normal. However, when aspartate, in excess, crosses this barrier into the brain, we are intoxicating our brain.

What are the Side Effects?

In anecdotal reports, aspartame has been linked to various neuropsychiatric disorders, including panic attacks, mood changes, visual hallucinations, manic episodes, and isolated dizziness. A small, double-blind crossover study of patients with major depression revealed a higher incidence of reactions in these patients compared with non-depressed volunteers after administration of 30 mg/kg for 7 days; symptoms included:

Aspartame and My Grandmother

I’ll never forget how my Grandma constantly drank her coffee and tea with NutraSweet a few times a day. She had diabetes and couldn’t use the regular sugar, so we gave her the alternative. During the last seven or so years of her life, her memory drastically diminished and confusion and dementia become more and more present. Now I’m sure that a lot of this was natural and due to her age (80+ years-old); however, I feel that factors such as her meat-rich diet and daily intake of NutraSweet played a role is exacerbating her illness.

Who knows what the impact on my Grandma’s memory would have been, had she not consumed Aspartame. But with any drug that has this much negative research behind it, why should anyone take the risk of consuming it? Why?

This article is only a cursory exploration into the negative effects of aspartame. For more in-depth and constantly updated research into this harmful and toxic neurotransmitter, please visit: Aspartame News

There is a documentary called “Sweet Misery: A Poisoned World” on YouTube, in which Cori Brackett tells about her own experience with aspartame. She believes that the condition of MS that she developed was linked to aspartame and the diet soda that she used to drink. At one time, she was disabled but has slowly recovered to be able to walk and speak. The documentary has some compelling content to watch.