You are here: Home / Antioxidants / Reduce Cholesterol with Cinnamon!! 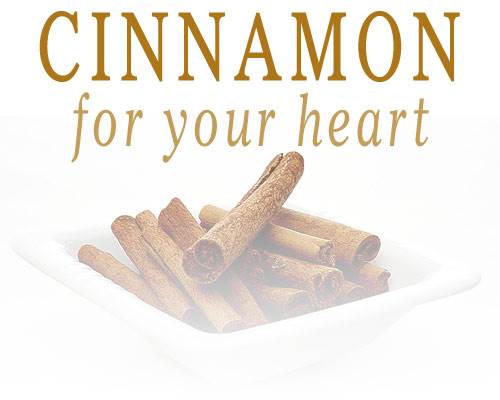 That’s right! The spice that makes cinnamon rolls exquisite and oatmeal cookies rock can also help lower your high cholesterol – without the pastries of course! Cinnamon is a natural antioxidant, an antimicrobial, and has been used from everything from colds to protecting against heart disease. But research has shown its true hidden powers.

In 2003, Dr. Richard Anderson headed a study at the Human Nutrition Research Center of the U.S. Department of Agriculture that was studying cinnamon’s help with diabetes patients. During their research, they found that methylhydroxychalcone polymer, or MHCP, a water-soluble chemical compound found in cinnamon, actually mimicked insulin function and lowered the blood glucose levels by 18–29% following 40 days of treatment. These results continued to be seen even 20 days after cinnamon had been stopped being administered.

A study of 30 people with type 2 diabetes revealed a significant decrease in blood glucose, triglycerides, LDL and cholesterol levels after taking cinnamon for 40 days. Researchers expressed hopes for human trials with the use of cinnamon and its ability to treat type 2 diabetes. – Cinnamon for Diabetes – Dr. Mercola

Cinnamon as a Cholesterol Reducer

But even more interestingly, it also reduced blood lipid levels. The same study resulted in total cholesterol being reduced by 12-26%. LDL, or the bad cholesterol, was reduced by 7-27% and triglycerides by 23-30%, while the HDL, or good cholesterol, remained unchanged. They had varied the levels of cinnamon dosages, and all were shown to be effective. And just like the glucose levels, the results were seen up to 20 days after treatment had stopped, a boast that even statins of modern medicine can’t make.

Another study from Korea published in 2006 found similar results, that triglycerides and total cholesterol levels were significantly lower after six weeks. Here they found that HDL levels were actually higher.

If you are considering adding cinnamon as a cholesterol reducer to your diet, be aware that saliva can break down its active components, so taking it in pill form is best for medicinal actions. Beware of not taking too much of it, as other compounds in it can be destructive in large doses. Dr. Anderson’s study had patients taking from 1 gram (equaling a ½ teaspoon) to 6 grams of powered cinnamon a day for 40 days, and all were shown to be effective.

But to be safer, you may use cinnamon extract for your needs. As an extract, cinnamon is water-soluble and far less toxic, and can be taken up to 80 mg a day. Also, cinnamon contains coumarin, a blood thinner, so if you are on an anticoagulant drug by prescription, make sure to take an aqueous form of cinnamon which will not interfere with the drug. This can be as simple as adding cinnamon to coffee before grinding it, or using cinnamon sticks in hot water for tea. Capsules can also be purchased with the water-soluble extract inside.

Cinnamon can prove to be great prevention for many health conditions. However, just be sure not to be fooled into eating those cinnamon rolls! Cinnamon on its own will do the trick, and keep those levels down.