You are here: Home / Tea / The Great China Tea Run 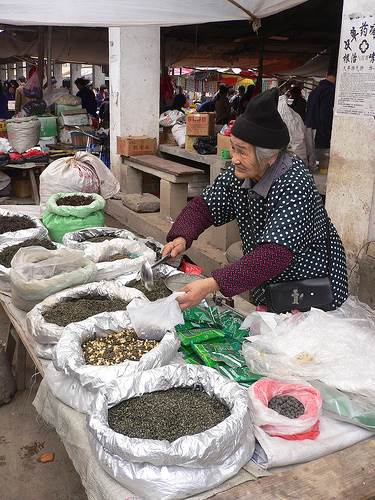 There were other brave and dedicated men who spent their lives smuggling tea from China to their home markets. The Ma Bang (Horse Caravans) of Tibet traveled over mountains and across barren plateaus to reach their destinations. For the West, the most storied smugglers are the clippers of the the mid 19th century: the fastest sailing ships ever built, made to make the run from Canton to New York and London in less than 90 days.

The English addiction to tea became unbreakable in the late 17th century. So serious were the lower and upper classes about their tea that even after a 119% tariff on tea mandated by the restored King Charles II, English merchants and pirates linked hands with the Dutch merchants and pirates (their hated enemies at the time), and both made fortunes on the black market with tea. Sanity was restored in the late 18th century after the tax was reduced to double digits, ushering in an era of legitimized tea trade with an emphasis on speed, not guile.

From East to West

By this time, Americans and Europeans knew their teas. It’s interesting to note that we knew more about China and tea 200 years ago than we do now, even with the books and websites available to us! Merchants from all western nations were operating out of Canton and later Fuzhou. There were thousands of Chinese in the American West and great friendships developed between the hustlers and officials of the East and West — so much so that one of the greatest clipper ships ever built, the Huoqua, was named after a Chinese merchant in Canton who had died.

There were hundreds of shops in London and New York that sold traditional Chinese medicines and herbs, Indian spices and cures, and of course, many different kinds of tea. The journey of (eventually) roughly 80 days from Canton to London/New York naturally ruled out certain types of teas, such as white and green. But the dockworkers on both ends understood and respected the market demand — and the profits to be won if that demand could be met — so crews came up with many ingenious ways to store their cargo for the long trip back.

Clippers were built for speed, so they lacked the cargo capacity of their Indiamen predecessors operated by the East India Company back when they had a monopoly. There are tales of Chinese and English crews devising methods together which would enable the Chinese to load the cargo as tightly as possible and the English crew to unload them as quickly as possible.

That is why the English (and most of Europe and the USA as well) drank primarily black tea. Only tea that had been cured and roasted would be able to make the trip without losing its taste or becoming bitter and unpalatable to the Western tongue. Up until very recently, green tea was basically unavailable anywhere too far from the growing areas due to logistics.

During the clipper age, basically from 1840 to about 1870, the Great China Tea Run was one of the most anticipated and talked about events of the year. Great fortunes were wagered on the winner and the quality of the tea it would deliver. Back then, just like today, there was much debate about the medicinal qualities of tea. There was a general acceptance of the idea that tea was pleasurable and prolonged one’s life and gave energy, but exactly how this was done and with what side effects provided enough room for debate.

The Myth and Magic of Tea

Early in England, the king and his nobles worried publicly about the effect tea would have on the “working classes”. Tea was considered a possible route toward sedition, because of the communal nature of tea drinking. Certain alchemists claimed tea produced depression and lethargy in the working masses, which greatly worried their feudal masters.

As the Enlightenment tore the clothes from the king, so also the debate about tea became a local and personal issue, as opposed to a government mandated one. Throughout history, enterprising entrepreneurs and enamored customers did everything in their power to meet over a cup of tea and haggle one out. Even when outside forces collude, such as the East India Monopoly or the King’s Tea Tax or even the Communist Revolution last century, which removed tea from the tables of most Americans for 50 years, the tea trade still manages to thrive.

I really like to think of tea as responsible for sedition, as Charles II feared, because that truly is the magic of tea; it doesn’t have just medicinal qualities and unique flavors, but social ones too. Tea has the uncanny ability to bring people together around one table. And I always feel smarter when I drink tea from a tea pot.