You are here: Home / Chemicals / What Does “All-Natural” Really Mean? 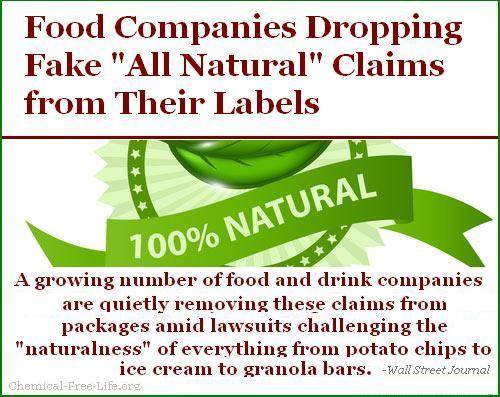 It goes without saying that those trying to live healthier lifestyles are attracted to goods that are grown naturally. But now, there’s reason to believe that just because a product is labeled as natural, it may not be any better for you. That’s because, up until now, no industry regulations have been set on the words ‘natural’ or ‘organic’ – meaning just about anyone can use it on their product, even if it’s not totally true.

This was the case for both Cadbury Schweppes and Kraft, two prominent companies from the United States and England. Both companies are now facing lawsuits for labeling some of their beverages as ‘natural’ despite the fact that they contain high fructose corn syrup, a very unnatural sweeter. Ben & Jerry’s’ ice cream company also caught flack for claiming that some of their products are “all natural” though many artificial ingredients are included in the recipes.

As this issue continues to be examined, it’s likely that many other companies will follow suit in the courtroom. This is the good news – after all, the more that consumers voice their opinions on the subject, the sooner regulations can be adopted.

That being said, until guidelines are set on terms like ‘natural’ and ‘organic,’ checking out the ingredient-list on the products you purchase is the only sure-fire way of getting goods that are really synthetic and artificial ingredient free. Besides high-fructose syrup, sugars come in a variety of “-ose” names that may not be so obvious. These include sucrose, lactose, glucose, dextrose, fructose, and maltose.

Other common artificial ingredients that have landed into products labeled “natural” or “organic” include xanthan gum, an artificial thickener; ethylene, which speeds up the ripening process for fruits; and fattening oils such as hydrogenated oil, soybean oil, and alkalized cocoa powder.

In the Meantime, Use Your Own Knowledge

While concerned authorities work a way out to fight misleading information on the subject, you should use your own knowledge, by learning from sources like the article you are reading now, to make sure that you’re getting a real ‘natural’ product if it is claiming to be so. For example, the blueberry yogurt that you are buying might not be drawing its ‘blue’ tinge from blueberries alone – check the labels.

Similarly, an ‘all natural’ salad dressing might be containing those unhealthy ingredients, that you’ve to watch out for, in their long ingredients’ list. You buy these dressings to add just a ‘little’ zing to your healthy salads, thinking you’ve done enough to take care of your health. But, more often than not, that ‘little’ portion of added dressing might be neutralizing all the healthy benefits of your fresh salad. Instead of buying an unhealthy dressing, it is better to mix balsamic vinegar with a little extra virgin olive oil to make you own at home.