You are here: Home / DIET / What is the World Saying about Genetically Modified Food — Safe or Deadly, You Decide 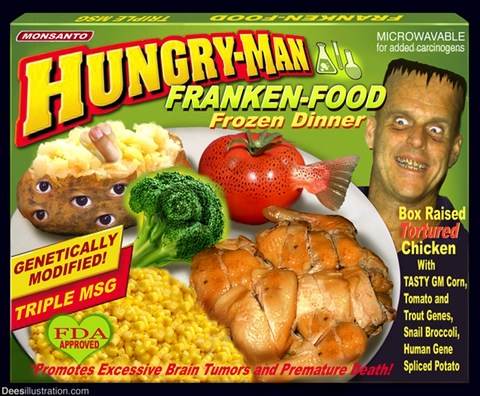 Over the past few days, Skrewtips has received many comments from people sharing their views on genetically modified fruits and vegetables. Some people are absolutely and vehemently against the production/consumption of GMO’s and others seem to wholeheartedly support them. But at the end of the day, most people have no idea what “Genetically Modified” means, having no impact on their buying habits at all.

Please read some of the comments and offer your input into this very important issue.

Why is genetically modified evil? Many things are genetically modified for the better. Plants are sprayed with a hormone specific to its species to create seedless fruit. Do you run from seedless grapes? Most other types of genetic modification involves taking a gene from an animal that is something like mosquito resistant, and putting it into the plant, thus eliminating the need for pesticide. Look things up before you open your ignorant mouth. You can eat inorganic fruit all you want, the pesticide won’t kill you.

Genetically modified crops are the most rigorously scrutinized foods in America, regulated by the EPA, USDA, and the FDA. Genetic modification merely allows crops to produce higher yields while thriving in conditions it would be unable to naturally. It’s not like scientists are fiddling with the “be more poisonous” gene.

It’s wonderful that America has such an overabundance of food that you can afford to RUN!!!! from GM foods, but they are a matter of life or death in countries where that is not the case.

Also, unless you’re eating nothing but wild berries picked off a hidden bush in a secret forest on an alternate-dimension Earth, everything you eat has been modified over time through human selection and modification.

Many people tend to associate genetically modified with steroid and chemical enhancement which couldn’t be further from the truth.

The difference between a GM food and a conventional (or organic) food is the gene make-up, which as the end result produces a protein – which in almost all cases (for the purposes of GM food) acts as an enzyme, changing one chemical into another. Now, the word “chemical” does have some harsh connotations in the English language, but since we’ve put semantics aside, I’ll continue to use it and point out that all of the genes added to GM food have to come from natural products (i.e. scientists do not create genes for a specific purpose out of nothing, it must come from a specific animal).

I’m sure you’re already aware of that and I’m sorry to go over it again, but it’s a nice reminder that GM food is not purely science-fiction – this food is still natural and is just the product in the next step of artificial selection – the same kind of selection that led to the organic foods you love so much. This next step, however, lets developers have more control over the outcome so people don’t have to sacrifice flavor for fruit that last in storage longer, for example.

Genetic modification mainly tries to do the following: increase yields, increase storage length and reduce bruising, and reduce pesticide use. And as long as there’s no plastic in your apple, all of the genes in it came from living things nature created.

I love the way some people say scientist with a sort of hisssss to it like a snake. For some reason, we evil scientists have gotten a bad rap just for trying to make the world a better place. While you’re out there buying hemp underwear and rubbing rock salt under your pits for deodorant, some people in the world haven’t eaten in days. I doubt very seriously, with all of the ignorant tripe you’ve chosen to waste your time and money worrying about, that you’ve ever had to go a second without food. If the difference is between your body slowly and agonizingly devouring itself for nutrients, or a bumper crop of GM food, I think I’d sink my teeth into an ear of corn with a little mosquito DNA in it – wouldn’t you?

Also, I personally am a clinical scientist. When I’m not worshiping the devil, or drowning baby seals, I save people’s lives. If you don’t like what us evil scientists are doing, next time you get an infection, bacteria, or virus, try to avoid hospitals. Maybe you could try an incantation or meditation. Maybe they make organic coffins these days, I’ve heard stupider things.

I am opposed to GMs. Ever f’ing hear of Monsanto?? Look at the politics it has created/destroyed. They think they can sue farmers because of wind pollination, essentially screwing the farmers out of their entire farms!

Please, tell me how the things they do can benefit the greater good. How much good can a GM crop be if it can’t be sustainably produced?

My prob with GMs is the way they just passed through without any of our say, without testing etc. Because my son wound up having a deeply damaged immune system due to environmental toxins, I know that messing with mother nature has a down side.

why do we need GMs anyway? It seems that the more we mess with nature, the more we need to, and the food supply has gone up, while the nutritional value has gone down.

I agree. Humans have already messed up this planet enough. Do we really need to tamper even more with our food supply?

I don’t think people should be genetically altering anyting. You start messing with nature and before you know it, you will end up having children that have 5 arms 3 heads.

On GMOs I see two major problems that go beyond the health issue (which, for the present, is based on the personal views of an individual, since little evidence exists).

The first, for me, is patent rights. Biotech companies are trotting across the globe and taking wild and natural genomes of plants and claiming rights to them. Yes, this sounds fair since they “found” the gene that does STUFF. But entire plants are getting patented. Then international trade agreements require those villages to stop planting those crops. Next, its our genes; if you have an anti-BADTHING gene, a company can own it and sell it.

Second, and which scares me the most, is the destruction of biodiversity. What protects all living things from being annihilated from disease is its inherent genetic differences from thing to thing. If GMOs are promoted to help curb world hunger, crops worldwide will slowly come from a single strain of DNA, since GMOs are generally sterile so you have to buy more seed. Then a new disease comes along and wipes out an entire nation’s supply of that crop. Yes, this is very cynical, but it’s a very strong belief by many people – enough so to start a seed bank in Norway.

While I’m not completely opposed to GM products, I do remain extremely skeptical. We are only beginning to realize the real power in genetics. Without proper, unbiased, extremely thorough testing, we won’t know what the GM foods might do.

I bring up ‘unbiased’ because the USDA, for one, is there for the benefit of companies, not consumers. That’s why the organic labeling was changed from requiring the product to be 100% organic to 95%. Many companies petitioned for the change to make it easier and cheaper to sell organic labeled products.