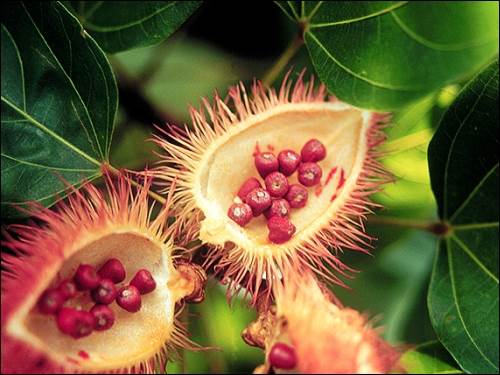 The mysterious red seed in the spiny, hedgehog-looking pod certainly seems strange looking, and maybe even downright dangerous, but it’s actually quite a traditional part of both Mexican cuisine and Caribbean folklore as a herbal medicine. Achiote, otherwise known by its Aztec name of achiotl, comes from the Annatto tree (Bixa orellana), and is known for the brilliant saffron color its seeds exhibit after the pods split open to reveal their tiny inhabitants.

Known as Annatto, Used as a Food Dye

Indeed, achiote is often used to dye foods like rice, and sometimes used as a substitute when saffron itself is too expensive. It’s also a very common natural source of food dye in the USA, where it is more commonly known as annatto. But did you know that achiote has a powerful legacy of healing and antioxidant effects?

This concentrated red hue can be extracted by boiling the seeds that emerge from inside the seedpod when it bursts open. The intense vermilion hue comes from the high concentration of bixin that the annatto seed contains. The little known fact is, though, that bixin is also an effective antioxidant – in studies done on small mammals, it has proven to heighten “cell-mediated and humoral immune response”. Bixin is similar to beta carotene, but bixin is generally seen as the more stable of the two compounds.

The leaves of the achiote plant are also powerful; applied directly, they have anti-inflammatory effects and so they’re often incorporated into injury treatment as well as prescribed for fever and disorders of the digestive system that involve disrupted blood flow. Some say achiote has mild laxative properties as well. The consensus about achiote is that it is effective in drawing out toxins; for this reason, it’s also been traditionally used to treat snakebite.

Achiote Tree and the Aztecs

Most of us don’t have an achiote tree in our backyards. The species itself is tropical, finding its home in the Amazon rainforest and in surrounding areas. However, it’s still possible to obtain achiote in many forms – many groceries that cater to Latin American foods carry this fantastic herb which can easily be used to add both spectacular color and antioxidant benefits to whatever dish you’re cooking!

Next time you’re in the market, have a look – incorporating achiote into your diet can be a fantastic idea. The ancient Aztec civilization was on to something when they brought this little seed into their daily rituals.