You are here: Home / Amaranth / Amaranth: The Carb for Weight-Loss and Complete Nutrition 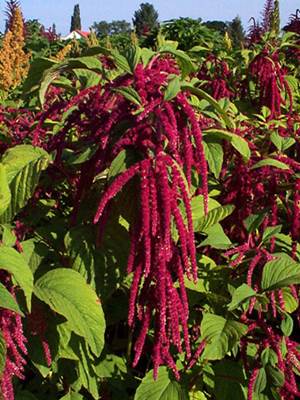 Amaranth is a nutrient-rich ancient grain from Mexico that has three times the calcium of milk.

Interested yet? You should be. But that’s not all.

Amaranth is also gluten-free and an excellent food of choice for those who are on a diet and want to feel full and satisfied. Because of its great calorie-to-nutrient ratio, amaranth is a great weight-loss food. This is what we call nutritional weight loss. Conversely, it’s an amazing grain of choice for those with limited nutrition because of the powerful punch that it packs per calorie. Amaranth nutrition is like no other grain. No doubt, amaranth is an awesome addition for any weight loss program out there.

A Versatile Food of the Aztecs

Nowadays, we’re lucky enough to be reacquainted with this versatile food, but if it weren’t for a few remote villages in Mexico cultivating it in secret, we wouldn’t get to know amaranth today. The grain was widely used in Aztec ritual as well as daily life – its numerous seeds were eaten either popped or un-popped. It was used to make a beer, its leaves were boiled or fried, and the flour made from the amaranth plant was used in religious ceremonies.

Europeans were so intimidated by the ferocity of Aztec ritual that they banned the cultivation of amaranth (as they did coca leaves in Argentina), which they saw as an integral part of religious life. Notably, amaranth was combined with honey and dedicated to the god “Huitzilopochtli”, which looked a lot like Communion to the Catholic settlers, which made them even more uneasy. Unfortunately, they failed to realize amaranth’s day-to-day value – notably that it was one of the most nutritious, easy-to-cultivate, hearty grains in the world. If they knew, they would surely have adapted and begun to grow amaranth for themselves.

A Grain of Great Importance

The name “amaranth” comes from the Greek “Amarantos” – the “one that does not wither”, referring to its beautiful colors and resilient stature. It’s known under many names and epithets, including the colorful East African names of “chepkerta” (“drought crop”) in Kalenjin and “arowo jeja” (“we-have-money-left-over-for-fish”) in Yoruba. When a culture lovingly gives a grain such a specific name, you know that grain is of great importance. For many cultures, amaranth is a source of food and ceremony, but it also has other uses such as dye and ornamentation.

Break Your Wheat Dependency with Amaranth

Far more nutrient-rich than wheat, amaranth is also gluten-free, which makes it an excellent alternative for those who are seeking to divorce themselves from a wheat dependency. It is also extremely high in protein and contains an unusually complete amino acid profile, like its fellow ancient grain quinoa. Amaranth is made up of 15-18% protein, making it a great way for vegetarians to gain adequate protein in their diets. And it contains a host of additional nutrients as well.

For starters, it’s a great source of dietary fiber to help digestion and aid food in passing through. In addition to this, amaranth contains necessary dietary minerals such as iron, magnesium, phosphorus, copper, and manganese.

The “Grain of the Future”

Amaranth requires little water and can thrive even in desert conditions. It’s been long cultivated traditionally in African countries and does well in hard-to-cultivate land. It provides food security in areas where other crops like wheat and corn don’t do well at all. For these reasons, amaranth is often referred to as the “grain of the future.” Indeed, the future may see a lot more of amaranth – which, considering all its benefits, is definitely a good thing.