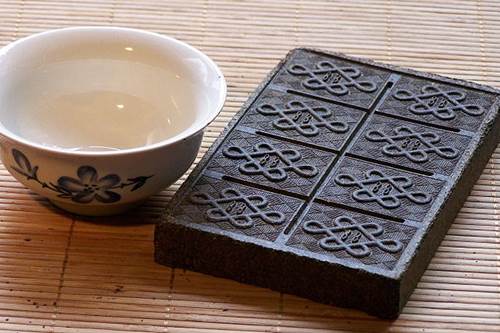 When it comes to tea, only recently has the common man gained access to fresh greens and whites, aromatic oolongs and delicate yellows. For centuries, the best teas went to the rich and powerful and the common man drank what he could, when he could.

So what did he drink?

He drank brick tea. Brick tea is basically packed tea leaves left to ferment and dry in stacks, forming a tea brick. This method of storing and packaging tea is prevalent in southwest China, especially in Sichuan, Chongqing and Yunnan.

There are several reasons for the development of brick tea, but perhaps the most interesting is the Horse and Tea Trade Route. This route extended from Lhasa east to Chengdu and south to Kunming. Branches of the route went into Chongqing, Guizhou and parts of Guangxi Provinces and the route met up with the Silk Road in the north and became the Southern Silk Road when it left China proper and entered Burma on its way to India.

Traders sold salt, silk, horses and, of course, tea on this road. Tibetans wanted tea for their monasteries and palaces and homes and the Han needed horses for their industry and wars. The rumors state that only the worst tea made it through the border outpost of Kangding and only the skinniest horses, but the truth is, of course, much more beautiful.

When tea is sent over long distances, it ferments. Hence the development of black tea (roasted enough to not ferment) by the British bringing tea to Europe, and tuo cha by the traders of the Horse and Tea Trade Route. Instead of roasting the tea, the traders allowed the tea to stew and began tinkering with the methods — burying in the ground? leaving in wooden or stone casks? — in order to satisfy their customers.

For example, it should be known that Pu’er is not a type of tea. It is a place! The type of tea is mao cha, which is a big leaf variety grown in Yunnan — but many Pu’ers are turned into bricks, or tuo cha. Pu’er brick tea and the teas that come from that part of Yunnan are famous because there is such a rich diversity of tastes and aromas developed there by the tea farmers.

Another brick tea of note is the Chongqing tuo cha, which is a lighter colored brick with a bittersweet taste and a strong aftertaste. In one part of Sichuan, near the border with the Tibetan region of Aba, is a particular brick that has the depth of taste that many Pu’ers have. It is a deep red leaf with hints of black and brown and the taste ranges from caramel to a wet earthy syrup. The difference between the two teas is aging, either true aging or “expedited” aging.

Making of a Tuo Cha Brick

A raw tuo cha brick is comprised of large green leaves pressed together that slowly ferment over time and become highly sought after, expensive bricks of tea. Another form of aged tuo cha is aged through the same process that creates yellow tea out of green – piled up leaves with a cheesecloth or canvas over the pile to allow the leaves to “burn and stew” for a while. As with oolongs and the making of yellows, the real tuo cha craftsman knows (or guesses correctly) when to sift the pile to create a uniform and unique flavor.

Tuo cha is also highly valued for its medicinal qualities, which are similar to many of the benefits to be found in products of the Camellia bush — increased blood flow, sharper mind, anti-bacterial effects in the mouth and stomach, help with losing weight. But truly the greatest medicinal effect any tea, including tuo cha, can have is by giving you an afternoon or evening of peace and quiet with a healthy drink that doesn’t intoxicate you and tastes wonderful.

How to Buy and Brew Tuo Cha Brick Tea

If you find yourself in the vicinity of tuo cha, look for solid bricks of green that are not stone hard and brittle and keep them in a safe place for a while (oh, 20 years or so). Alternatively, buy an already aged tuo cha and brew it in a clay pot or gaiwan, or if you have an old iron pot, that works great too and use very hot water — at least 90 degrees C — for the first steep and allow the water and tea to get used to each other over a period of 5-10 steeps.

Tuo cha, aside from Pu’er, should have a very earthy taste and fragrance with over and undertones that depend a lot on how long the brick has been waiting for you, what the fermenting process was like, and where the tea came from. An aromatic brick with uniform leaves and a healthy brownish-red color should do nicely.