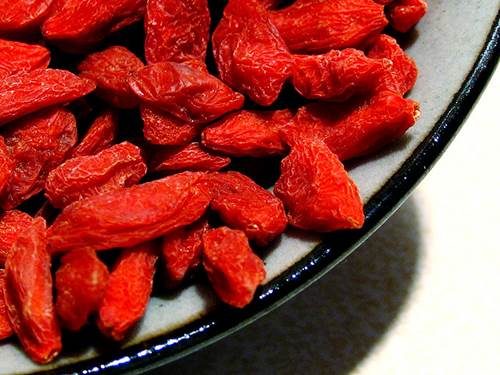 Goji berries, native to the regions of China, Mongolia, and the Himalayas in Tibet, have been used for over 6,000 years for various health reasons such as: protecting the liver, improving eyesight, improving sexual function, boosting immune system, and are notoriously known for promoting longevity. And who doesn’t want to live longer, right?

Zeaxanthin, an antioxidant found in goji berries, helps to protect the retina of the eye. Goji berries may play a vital role in offsetting the development of macular degeneration, the leading cause of blindness in people over the age of 65.

“I decided, what do I have to lose at this point so I called her and picked up a bottle of Goji Juice. When my son came home after school, I gave him 4 oz. within 2 hrs, I gave him another 4 oz, and again at bedtime. The next morning I dumped yet another 4 oz down his throat. He came home from school that afternoon and stated that he started concentrating better. Within 5 days, Garrett’s aide called me and asked me what I was doing with him. She said that not only was he concentrating, he was writing down all of the notes off of the board, something that he had never been able to do without the help of his aide.

At that point, I decided that I was going to give it to my daughter (13 years old), who is also autistic, and much lower functioning. Within 2 weeks, Adrienne’s digestion started improving and she seemed much more alert. She could tell us when she wanted toast, watermelon or popcorn, but she never referred to me as mommy nor would she acknowledge any of our family by names. She also couldn’t answer questions like “how are you” “I’m fine”. Three weeks, after giving Adrienne Goji juice, my husband and I were having lunch in a restaurant, when I received a call from her school. The teacher said “Adrienne is being very emotional and I thought that if she could hear your voice on the phone, that maybe she would feel better.” I said “well for one thing, Adrienne doesn’t talk on the phone. She probably doesn’t feel well. I’ll just come and get her.” The teacher said,” could you just talk to her anyway”. So the teacher handed my daughter the phone and I heard a soft voice on the other end saying “Hi mommy”. I didn’t recognize the voice right away because my daughter had never said anything like that in her life. When I realized that it really was her, I started crying and couldn’t get my voice to answer her. I’m crying again, now, as I write this.”

Goji Berries May Be the Cure to Cancer

Goji berries cancer research, though not yet well supported in the West, has shown to have positive results in increasing cancer killing agents in the body.

The Goji berry and its extract the Goji juice is known to be a rich source of Germanium that is known to have anti-cancer properties. Studies in Japan go to show that organic Germanium is found to be effective in treating lung cancer, cervical cancer, liver cancer, testicular cancer and uterine cancer.”

It seems as though the production of g-interferon is responsible for thwarting the growth of cancer cells and preventing the duplication of cancer call DNA.

Where to Purchase Goji Berries

Once a week, my brother travels into New York City, Chinatown, to purchase a pound of goji berries for about $10. Online stores such as Natural Zing have reasonable prices, but nothing close to brick and mortar Chinese Herb shops. Don’t have a Chinatown? No problem, take a trip to Whole Foods Market in your town and you’ll be sure to find goji berries there.

For thousands of years, the Chinese have benefited from the ancient berry with profound results of improved health and longevity. Now, under the Western lens, goji berries are still considered a powerful fruit containing immense healing power. Goji berries have definitely found a place in my heart.