You are here: Home / Amaranth / Health Benefits of Jamaican Callaloo and How to Cook Callaloo 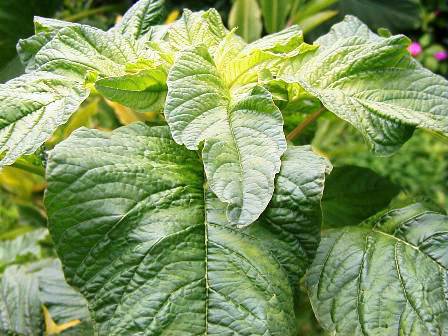 As a child, I recall walking into the kitchen and seeing a large pan overflowing with greens. Chopped greens with onions, garlic, and pepper frying in an open pan while mom was in her usual cooking frenzy dashing across the kitchen like a pinball — back and forth between the oven, fridge, cabinets, and sink.

This was my first introduction to what I now know as Jamaican Callaloo. It wasn’t until many, many years later that I would find out that “callaloo” has another name – “Chinese spinach” – and that it’s a type of amaranth plant that’s been consumed for thousands of years.

Callaloo is a green leafy plant that has been culturally consumed in the West Indies, namely Jamaica, Haiti, Trinidad, etc. Here in America, as it grows with weed-like speed and rapidity, it’s usually treated as a weed and is readily killed when appearing in gardens and farms across the country.

Perhaps it was 10 years ago when my mother scattered a few seeds from Jamaica across the yard, and since then, it’s been growing aggressively on our property. It thrives in semi-dry climates.

Jamaicans say that the “plant has a mind of its own,” and sometimes doesn’t grow for a season or two before reemerging with renewed force and abundance. Last year during heavy summer rains, it was scarce here in New York. But this year, with moderate to low rains, we reaped plenty.

How I Cook Jamaican Callaloo

Jamaican callaloo is really delicious stuff! Here’s how I like to cook callalloo :

Callaloo is more or less like spinach, though people will swear that it’s totally different. It does have a distinct taste and is very savory. It’s not as sharp as spinach, but with more creamy notes. It’s smoother and rounder in taste, than spinach. And personally, I like to spice it up with some serious pepper.

Here are the principal health benefits of Jamaican Callaloo.

Leaf Jamaican vegetables are typically low in calories, low in fat, high in protein per calorie, high in dietary fiber, high in iron and calcium, and very high in photochemical such as vitamin C, vitamin A, lute in and folic acid. Though the Jamaican callaloo Jamaican plant itself does not have much medicinal uses the food does contain several vitamins and minerals, including Vitamins A, B and C, and is high in protein, iron, carotene, thiamine, riboflavin, niacin, ascorbic acid, amino acids, arginine, cystine, histidine, isoleucine, leucine, lysine, methionine, phenylalanine, threonine, tryptophan, valine, aspartic acid, glutamic acid, alanine, glycine, praline, serine and tyrosine. – Get Jamaica