You are here: Home / Bacteria / Kombucha: Weird Mushroom Tea or Source of Superhealth? 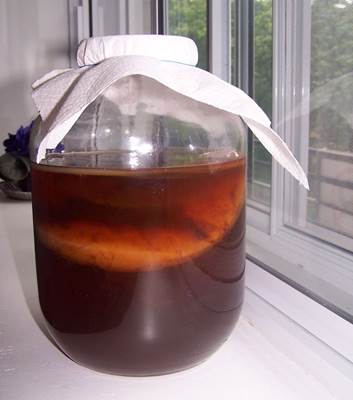 Some time ago, I had a rather stubborn cold. Nothing seemed very appetizing. I was feeling down, stuffy, and chilly. Then, on my way home from work, I stopped at a corner grocery for something cool to drink – and decided to buy my first bottle of kombucha.

Cracking open the plastic seal, I heard the fizz of the drink inside and took a sip. By the end of the bottle, I could smell through my nose again – something I hadn’t been able to do in days. I literally experienced a clearing of the sinuses. I don’t know if it was coincidental, or if the kombucha had something to do with my suddenly feeling better, but I’ve been both enjoying and researching this fascinating tea ever since then.

A Combination of a ‘SCOBY’, Sugar and Green or Black Tea

Kombucha is a fermented tea made from a combination of a scoby, sugar and green or black tea. People erroneously call the scoby a mushroom, when in reality it’s a byproduct of the bacteria and yeasts in the kombucha brew – scoby is an acronym that stands for “symbiotic collection of bacteria and yeast”. It’s actually comparable to the “mother” in vinegar. The scoby sits in the brew, processing the sugar in the liquid and turning it into acetic acid and other byproducts.

The end result is a delightful, tangy, slightly effervescent brew that is refreshing and – some say – healthful. The longer the tea is brewed, the more the scoby will have processed the sugar and the sourer the brew will be. This is why some people like to use test strips to test the pH of the brew – if it goes below 2.5, it may be too acidic to drink, but still makes a good vinegar substitute in salad dressing.

Kombucha Provides a Sense of Well-being

I’ve read many a report similar to mine from people who have experienced a sense of well-being after drinking kombucha. So what’s healthy about this weird drink?

Well, there hasn’t been extensive, conclusive testing to determine for sure what the effects of kombucha are, but there are some things we do know for sure. Finished kombucha contains acetic acid, which is the same acidic substance found in vinegar. This acid is a powerful antimicrobial, and the reason for vinegar’s widespread use for health.

Kombucha also contains certain B vitamins, which play an important role in cell metabolism. Kombucha also contains glucaric acid, which aids in the body’s own detoxification process by inhibiting the bacteria that would re-absorb toxins in the intestinal tract. Glucaric acid is also thought to have cancer-preventative properties, and scientists are testing it now. And finally, two important things: kombucha is a probiotic, and it helps to alkalinize the body – a big benefit towards maintaining a strong immune system.

Here is a link to a video that will tell you a little bit more about this fascinating tea and its benefits. Try it – there’s a chance you might like it.