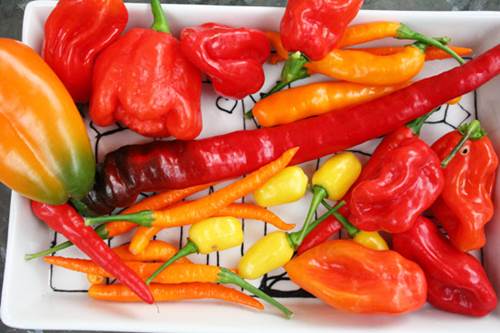 Every year in May, Sonia A. orders about 15 varieties of hot hot hot peppers from New Jersey and proceeds to grow them for several months until they are ready for harvest in mid-August through September. I was inspired to write this short piece on hot peppers after seeing how much she loved her peppers.

“Not for the Faint of Heart” 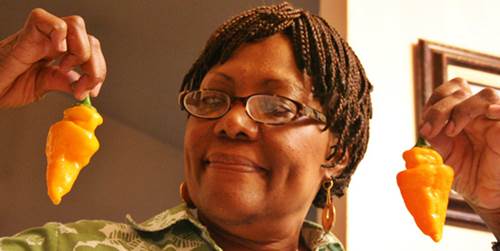 But her sort of peppers aren’t your regular: “These peppers aren’t for the faint of heart. The heat creeps up on you, and then BAM!!” she tells me while holding a red-hot rainbow display of green, yellow, red, and orange peppers of all sorts of shapes and sizes. Some as small as marbles and some as long as 1 foot. She grows everything — the hottest of the hot: Tabasco short yellows, cayenne, scotch bonnets (all Jamaicans know about these!), chili peppers, and more.

Are Hot Peppers Good for You?

But are hot peppers actually good for you? Something so hot, even dangerously hot to some, is bound to raise questions as to whether or not one should be consuming something that usually comes with a disclaimer when purchased in the store. But it just so happens that hot peppers are actually good for us. Hot peppers contain capsaicin, the component that actually makes hot peppers hot. Capsaicin has been linked to numerous health benefits. 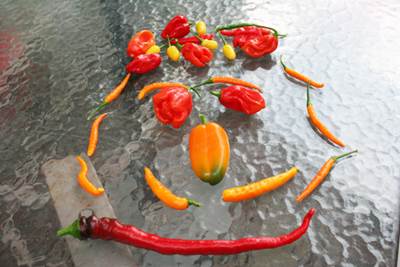 Here’s a short list of the health benefits of hot peppers, focusing on the active compound, capsaicin:

This age-old vegetable has similar effects to those of Aleve, Tylenol, Advil, Tums and chemotherapy all wrapped in one—except this food has zip, taste and no fearful side effects to the consumer beyond a spicy backlash.

The hot pepper’s fuel has the same metabolic effects as Ephedra without containing Ephredra’s negative cardiovascular side effects. It has been added to vitamin and weight loss supplements to increase effectiveness and safety.” – Peppers are hot — as a health and diet aid by Darren Swan (Northwestern University, Chicago) 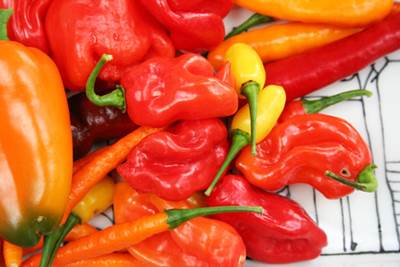 Being as curious as I am, I decided to eat one of these extremely hot peppers to see what would happen. And, let me tell you, as I write this, I can hardly type…I just went through 5 minutes of hell! I literally couldn’t walk. I hat to squat down and try to remain calm. My heart seemed to pump faster, my mouth was on fire, and there was a sort of debilitating effect pulsating throughout my entire body.

Then for about 5 minutes after the initial shock, there was about 5 minutes of extreme nausea. I just had to go drink some soy milk and walk around the house to help ease my stomach pain. Now… just over 10 minutes later, surprisingly, I actually feel really good. Calm, relaxed, renewed, and refreshed. I almost feel a bit pleasantly numb, actually. There’s this tingle throughout my body, especially in my mid-region. All pain has subsided, but I think you’d have to PAY me to eat another one of those peppers!

Disclaimer: Eat these ‘hotties’ at your own risk!!