You are here: Home / Boost Immune System / One Brazil Nut a Day is All the Selenium Your Body Needs 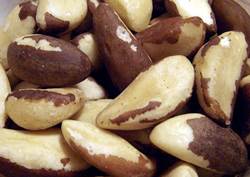 Would you believe me if I told you that one — yes, just one — Brazil nut per day could fulfill all your daily required intake of selenium! I know, it sounds crazy. But when you start experiencing and exposing yourself to the bounty of nature’s raw food, you realize these simple plants were put on our beloved Earth for a reason… and it doesn’t sound so crazy after all.

It doesn’t sound so crazy that a food like a Brazil nut could be so immensely powerful and beneficial to our health. I mean, hello!!! wake-up!!! This food was put here for a reason. No wonder why nuts, among other foods, are so densely nutrient rich and overflowing with healthy compounds.

Professor Thomson and colleagues carried out the first-ever study to look at how much selenium people can obtain from Brazil nuts and the resulting levels of antioxidant activity in their blood.

Their study has been published in the American Clinical Journal of Nutrition.

Over a 12-week period around 60 volunteers were divided into three groups, one of which ate two Brazil nuts a day, while the other groups were given either a 100 microgramme selenium supplement or a placebo to take daily.

At the outset, the researchers analysed the study members’ blood for selenium concentrations and the activity of a key antioxidant, known as glutathione peroxidase (GPx).

The body’s production of this vital cellular antioxidant and other important proteins depends on how much selenium is available, she says.

After 12 weeks, the blood selenium concentrations of the Brazil nut group were found to have increased by 64.2 per cent, while blood GPx activity went up by 13.2 per cent.

In the selenium supplement group the increase was 61 per cent and 5.3 per cent respectively.

“These results indicate that including a couple of Brazil nuts a day in the diet could ensure a greatly enhanced selenium status without needing to fortify other foods or take supplements.”

Selenium is an immensely powerful mineral that is found in soil and used by our bodies to increase thyroid metabolism, improve fertility, help fight cancerous cells, and protect our bodies from cardiovascular diseases. Selenium is multifaceted in its many benefits to our bodies. Across the world, people have low selenium levels which may impose unnecessary health risks that can lead to a plethora of diseases and complications in our system.

So, do your immune system a favor and get yourself some organic Brazil nuts from your local Trader Joe’s or Whole Foods Market. You won’t be sorry. And, hey, they taste absolutely amazing! However, since all nuts taste so good, you may be tempted to overeat them. Just remember to take it easy and only eat a few per day – too much selenium isn’t a good thing too. You may, if you wish, purchase Organic Brazil Nuts here.