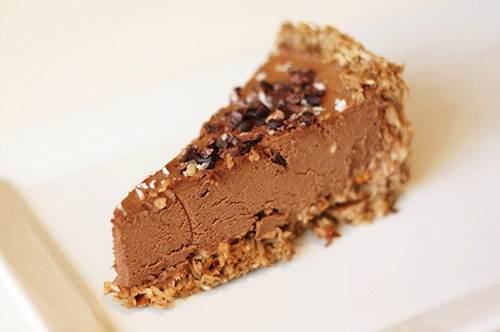 One of the hardest parts of transitioning into a “healthy” lifestyle for me was giving up sweets. But, I’ve found that after a year of detoxing, sugar and refined desserts just don’t cut it for me anymore. Once you really clean out your body, your taste buds can recognize impurities in your food. Also, when your palate becomes accustomed to pure and clean flavors, you’ll find that desserts with refined sugar and flour etc in them will actually taste bland to you.

This past Saturday, I took the tiniest bite of one of my old-time faves, a mint chocolate square from Marshall Field’s in Chicago (It has now been converted to Macy’s, much to the chagrin of Chicago residents). It seemed gritty and definitely not sweet enough for my tastes. I then walked two and a half miles just to get a raw lemon bar from a local raw bakery!

A rich raw treat can satisfy your cravings

It is believed that almost sixty percent of illnesses in America have their root cause in the standard American diet. Of course, sugar in its various forms and desserts is a big part of this mostly unhealthy diet. Then how can one deal with one’s sweet tooth that seems to have been ingrained in us since generations? Well, replacing your ‘traditional’ and unhealthy desserts with raw food desserts that are free from all that butter, cream, flour and sugar is a very good start.

A rich raw treat can satisfy your cravings, without filling your body with toxic waste. If you’re transitioning into a detox or have completed a detox, I suggest learning a bit about making raw desserts. Many of them are made with sprouted grains and nuts, which provide enzymes, vitamins and minerals. Trust me, once you develop a taste for these healthy desserts, you’ll be asking yourself why didn’t you get on the raw dessert bandwagon earlier.

Where do the raw desserts get their sweetness

Raw desserts get their sweetness naturally from ingredients like dried fruit and raw agave nectar (made from the agave plant, it is low on the glycemic scale) and that eliminates the need for any refined source of sugar or artificial sweeteners. Also, most raw desserts are gluten-free and vegan!

Other natural sweeteners for raw desserts include dates (high in natural sugars), maple syrup, raw honey (not processed) and stevia (contains no calories or fat). However, keep in mind that too much of even the best of things may become harmful. So, don’t go overboard with raw desserts just because they are so healthy.

This is a very sweet beginner’s recipe. Ani Phyo uses dates, soaked almonds, vanilla bean, chopped dried pineapple and coconut flakes to make delicious donut holes. The recipe requires just a bit of blending and mixing, and can be done in minutes. I like it because it doesn’t require hours of dehydrating, like so may other raw recipes.