You are here: Home / Antioxidants / Resveratrol and Wine for Better Health 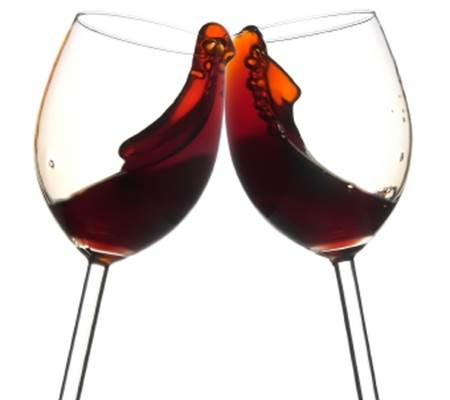 We’re just now past most of the major holidays, and I know many people probably have some questions – or some big monkeys on their backs! – having to do with indulging in large quantities of holiday food and drink. Specifically, I know I’ve been talking with people about red wine, which is pretty much a staple at holiday tables across the nation.

We’re always hearing about red wine’s antioxidant properties and the possible aid it can give in preventing heart disease. Then there’s all the talk about the much-publicized “French paradox,” or the idea that a glass of wine a day keeps French people healthier than other non-wine-drinking populations, despite the fact that they have a diet otherwise high in fat and calories. But how much red wine is actually good for a person? And at what point do the dangers outweigh the potential benefits?

A Glass or Two for Good Health

Most experts agree that a glass (for women) or two (for men) of wine per day has many health benefits. For starters, red wine contains an antioxidant called resveratrol, which has been shown to increase the lifespans of common worms. Resveratrol is produced in fairly high quantities by the common vine grape, and its main function is to protect the grape from superficial infection and fungal damage. In smaller quantities, red wine also contains other antioxidants.

Absorbing the Resveratrol in Red Wine

Extensive research and experimentation have shown that the resveratrol found in red wine is most effectively absorbed when the wine is consumed with a meal. Yet another reason to make sure you always take red wine with meals is that wine is an alcoholic drink, and alcohol, of course, enters the blood stream and becomes an intoxicant.

Drinking wine together with meals slows down the effect of the alcohol that might otherwise make you feel tipsy. You should be aware of this, though, and not drink more – the food will not actually keep you from getting drunk, even though it may slow down the time that it will take.

However, the wine’s alcoholic content can be potentially beneficial in several paradoxical ways: when you have red wine with a meal, the wine can also help your actual digestive process because the alcohol in the wine slows down the stomach’s emptying time and potentially keeps you feeling full for longer. In moderation, some experts claim that alcohol of any kind (not just red wine) can have a positive impact on the levels of the “good” cholesterol, HDL, in the body. Experts stress, though, that moderation is key; alcohol is by no means in the good-for-you category by itself and in excess.

Even within the context of holidays, alcohol should always be synonymous with an excess pleasure, and even though red wine can be beneficial, any benefits are by far erased if you overindulge. So, in short, a glass of wine a day may do you some good, especially if you have it with food; a bottle of wine, though, is not such a great idea. Read more about the benefits and dangers of wine here and here, and then consider how your own wine habits measure up.