You are here: Home / DIET / Simply Seaweed for your Health 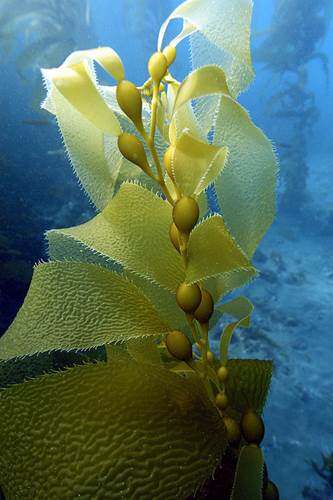 Kelp of Cat Rock, Anacapa Island – Kelp forests can be seen along much of the west coast of North America. Kelp are large brown algae that live in cool, relatively shallow waters close to the shore. They grow in dense groupings much like a forest on land. These underwater towers of kelp provide food and shelter for thousands of fish, invertebrates, and marine mammal species. Image & Info Courtesy: NOAA’s National Ocean Service

In my Chinese herbal class this week, we discussed Kun Bu and Hai Zao, commonly known as Kelp and brown Seaweed (genus Sargassum). These cold and salty underwater plants are classified in the Materia Medica by Bensky, the go-to-source for Chinese herbs, as “Herbs that Cool and Transform Phlegm.” It sounds a little strange in Traditional Chinese Medicine (TCM) language, but kelp and seaweed can treat a variety of western medical conditions if simply added to one’s diet.

Nutrition from the Oceans and Seas

Drawing their nutrition from the ocean and seas, kelp and seaweed are extremely rich in iodine and calcium, as well as many other vitamins and minerals. Depending on the strain, seaweed can be high in protein (Spirulina) or Vitamin C (red and brown algae). And, although these aquatic plants are low in fat, they have a higher content of essential fatty acids than land plants.

Seaweed draws an extraordinary wealth of mineral elements from the sea that can account for up to 36% of its dry mass. The mineral macronutrients include sodium, calcium, magnesium, potassium, chlorine, sulfur and phosphorus; the micronutrients include iodine, iron, zinc, copper, selenium, molybdenum, fluoride, manganese, boron, nickel and cobalt.  ………  Seaweeds have a salty taste that is an indication that the material can disperse phlegm accumulation, particularly as it forms soft masses, include goiter, the thyroid swelling that indicates severe iodine deficiency. – Institute for Traditional Medicine

Kelp and seaweed have been indicated in the treatment of rheumatism, low blood pressure, thyroid conditions, diabetes, chronic lung conditions and prostate and ovarian conditions. Kelp is effective at treating fatty liver, liver cirrhosis and weight loss, while seaweed softens nodules and masses in the body, particularly in the thyroid, neck, breasts and lungs.

The research agrees as a study from the Tokyo University of Marine Science and Technology decreased fat levels in mice on high fat diets by administering oil of edible kelp, called Tororokombu.

Tororokombu is a traditional Japanese food made from edible kelp. The way to make tororokombu is characterized by shaving kelp very thinly. It was found that tororokombu decreased the serum triglyceride level induced by oil administration to rats and had an anti-obesity effect on obese mice induced by a high-fat diet. These effects were more powerful than those of non-shaved kelp. – NICB

And, researchers at Kyung Hee University claim that Hizikia fusiforme, a variety of brown seaweed, suppressed the production of tumors, while another study at the Southwest College of Naturopathic Medicine believes the iodine in seaweed maintains normal breast tissue function.

Add Seaweed to Your Food

Found at your local health food store, seaweed can be added to salads, powdered for drinks, used to wrap sushi or treated as a salt substitute on your baked potato or in your soup. But, I think I’ll skip the gritty seaweed drink in favor of avocado nori rolls with wakame salad and chocolate seaweed pudding. Dessert chock full of nutrients and health benefits . . . I’d like to share, but you’ll have to get your own!