You are here: Home / Antioxidants / The Many Health Benefits of Cherries 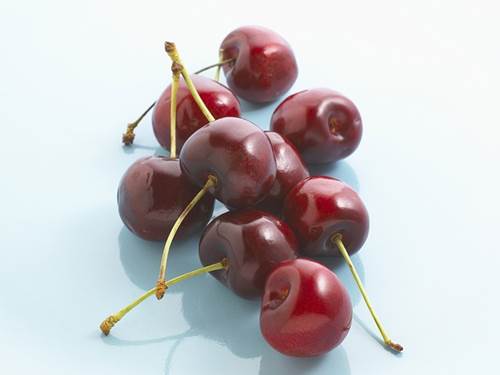 Cherries’ health benefits are remarkable. Cherries are good for many things – say, for eating and then competitively spitting out the pits while you’re walking down the boulevard on a nice summer day. At least that’s what I used to do with them as a kid. But did you know that aside from the powerful doses of vitamin C and vitamin A, cherries also contain a naturally occurring anti-inflammatory compound and have many other great health benefits?

Read on to find out about some of the ways that cherries can help you lose weight , fight free radicals, gain control of blood sugar, lessen arthritis pain, and more. Let’s jump into the health benefits of cherries!

In terms of antioxidants, cherries (specifically tart cherries) have levels higher than most other fruits. They contain an antioxidant called anthocyanin, which gives them their characteristic deep red color. Tart cherries contain the most anthocyanins, followed by sweet cherries; and they both contain more than blueberries or strawberries do.

So how are these units measured, anyway?

Well, antioxidant strength is measured in Oxygen Radical Absorbance Capacity (ORAC) units, which measures how many oxygen radicals a specific food can absorb and deactivate. The nutritional recommendation for people’s antioxidant consumption levels per day is 3,500 to 5,000 units, and tart cherry juice has about 3,600 units. In fact, even canned cherries have 1,700 units! So you can’t go wrong with cherries when it comes to deactivating free radicals.

For weight loss, cherries are also a marvelous snack food. They are similar to watermelon, celery, and cucumber in that they’re always low in calories and high in water. This means that you can eat a quantity of them and feel satisfied with your portion size, yet the amount doesn’t contribute to your overall calorie count significantly. Since sweet cherries also satisfy a sweet tooth, there’s no need to go snacking on high-fat, high-calorie sweet foods like chocolate (although I must say that I may have a few words to say about the health benefits of chocolate soon. Look for that!).

For diabetics too, cherries are good news – they help control ups and downs in blood sugar. The anthocyanins I mentioned earlier are also blood sugar regulators. Anthocyanins “show promise for both the prevention of type 2 (non-insulin-dependent) diabetes, the most common type, and for helping control glucose levels in those who already have diabetes,” says a University of Michigan doctor.

And finally, cherries and cherry juice for arthritis are showing promise for serious relief. Studies demonstrate that sweet cherries contain an anti-inflammatory agent similar to ibuprofein, and this may help lessen the symptoms of arthritis. During certain types of arthritis, such as gout, uric acid accumulates in the joints and causes pain. A study that had women eat 45 Bing cherries for breakfast showed that five hours later, uric acid levels in their blood had gone down significantly. This, combined with the fact that cherries reduce nitric oxide – another sign of unwanted inflammation, makes cherries a good food for arthritis management.

I’d like to say something about that George Washington cherry tree story; I’d like to say “sir, you wouldn’t have chopped that thing down if you knew”. But that story is a myth anyway – I’m sure our founding father was smart enough to understand that cherries are valuable. And given all these wonderful ways they help you, you’re bound to find your own reason for eating cherries regularly. Why not go eat a bowl today?