You are here: Home / Antioxidants / The Noni Myth 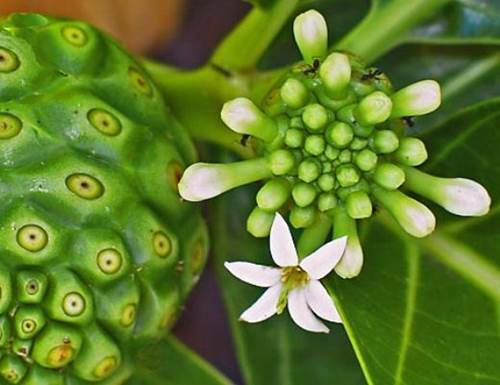 It’s easy to believe what Noni juice has to offer. We want to believe that drinking this exotic drink can do so many things for us: undo years of damage to skin, help digestion and metabolism, relieve chronic headache, boost energy, ease anxiety, and make us more comfortable in our own skins.

But, what do we really know about this fruit? Not a whole lot – which adds to its powerful mystique as a “healing wonder,” “superfruit,” and “traditional Tahitian cure” (we don’t know much about Tahitian customs, either!).

Despite its peculiar cheese odor, there’s no denying that the fruit of the Noni (Morinda citrifolia) is a very good fruit, high in nutritional content and dietary fiber. It contains a lot of vitamin C, iron, and potassium, and in fruit and pulp form, Noni is a great source of protein.

However, the protein and fiber don’t make it into the juice. With the fruit matter filtered out, you’re essentially just getting a lot of vitamin C and the other micro-nutrients. While vitamin C does have a variety of health effects, including antioxidant, it’s definitely not particular to this juice. For vitamin C, you might as well be eating an orange – it’ll taste better and you’ll be getting the benefits of fiber, too.

Noni does contain trace amounts of the following phytochemicals: scopoletin, catechin (also found in green tea), rutin, and lignan. Lignan and catechin have been shown in limited lab research to act as antioxidants; scopoletin seems to be slightly antibiotic and also to have an effect as a blood pressure regulator.

Noni is also thought to be relatively high in alkaloids – natural plant compounds that have a pharmacological effect on mammals. Fresh Noni juice and pulp probably contain amounts of these compounds significant enough to have an effect. In fact, many report striking effects from drinking fresh juice or pulp.

However, since Noni is not FDA-regulated, the Noni juices being sold on the internet for anywhere between $9 and $50 a bottle vary wildly in content, and it’s impossible to tell what they contain and thus how much Noni juice is actually in them. In fact, some of the leading brands contain quite a bit of blueberry and grape juices – NOT something you have to specifically mail order for. (Blueberries are considered to be a superfruit high in antioxidants – and they’re available at your local grocer.)

Not a Magic Key to Healthy Living

No one thing is a miracle cure, and Noni, though powerful on its own, is not the magic key that opens the door to healthy living. Noni juice lacks many of the nutritive qualities that the fresh fruit possesses; I’m afraid that unless you can get your hands on the freshest juice or pulp available, then much of the Noni juice phenomenon is hype.

Unless you live in Hawaii or Tahiti, shipping times alone will render your fresh juice to nothing more than sugar-water concentrate. Instead, load up your diet with fresh, organic, local produce and you’ll be getting hundredfold the benefits of a case of Noni juice (and you won’t be contributing as much to global warming because your fruit won’t be shipped halfway across the world).