You are here: Home / Health / The Secret to a Pain-Free Childbirth: Attitude 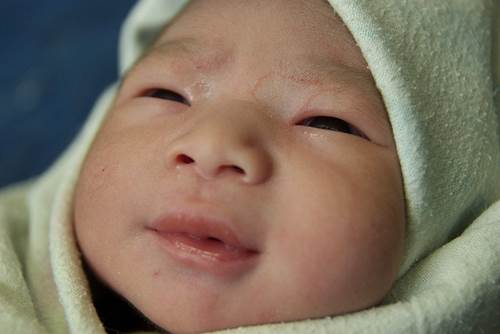 Early Labor can Set the Stage for Stress, but You can Overcome it

When my water broke during Lamaze class, I couldn’t count the feelings that rushed through my head. At only 36 ½ weeks, I was sure I was ready for my baby to come into the world, but I still wanted time to think about my pain options while I was bringing that baby into the world. In an instant, I went from having almost a month to make those decisions about medication to about three hours.

Because I avoid medication whenever possible, I planned on refraining from using any pain drugs. But, I wanted the options open to me should I feel like I couldn’t handle the pain. Whatever my decision, I didn’t want the hospital workers to force me to take unnecessary interventions.

The subject of pain medications during childbirth is controversial at best. Because women have had positive labor experiences using epidurals, many obstetricians have begun to consider the procedure a safe way for women to have a more comfortable experience during the births of their children. While the fetal problems associated with epidurals are slight, however, they do exist. Some of these effects include an increased unresponsiveness in the first few weeks of life, leading to an inability to eat properly, an abnormal heart rate, and the possibility of a fever.

Similarly, the intervention can cause problems for the mother-to-be as well, including higher blood pressure. In some cases, the medication does not relieve the pains or labor, and one of the most frustrating after-effects of the procedure, for many women, is the longer time it takes to get them back on their feet. Ignoring or ignorant of these effects, many women enter the maternity ward planning to have an epidural before they have even experienced any pain. A fear of pain is a self-fulfilling prophecy, as it will often prevent a mother from relaxing and, indeed, increase the level of pain she feels.

Although I was so shocked that I was shaking when I found myself in a hospital room instead of at the movies with my husband and friends that Saturday night, the best medication I received was a positive attitude. Throughout my pregnancy, I’d never given much thought to pain, and was never afraid of the labor process.

I tried to work, read, joke, and keep myself upbeat during early labor, even during the moments of pain. During some of the more intense moments, I attempted to make my body so relaxed that it was similar to sleeping. I succeeded, so much so that some visitors thought I had already accepted drugs!

YOU Control Your Body

Although the doctors began to recommend interventions as soon as I entered the hospital, I refused them because I knew my body. When the doctor said he was afraid the baby would take some time to be born, putting me at risk of infection, I disagreed, knowing she would be here before the night was done.

Only eight hours later, she was here, with no complications and no medication to speed up the process. (I later found out that she had jaundice and the drug they wanted to give me would have actually worsened that condition). Most doctors recommend that women evaluate their pain before accepting drugs as an intervention. When a woman is having an uncomplicated pregnancy and can manage her pain it is usually more harmful than helpful.

While I eventually accepted some mild painkillers through my IV, as the baby was in a posterior position and I felt pain between my contractions, I felt that my positive attitude and refusal to fear pain were the best painkillers. In fact, I was on my feet later that night and consistently refused even the Motrin that was offered to me. I had next to no after-pain.

No Need for an Epidural? – You Decide

While epidural interventions are recommended for some women who are having difficult labors, relaxing on my own and keeping things positive was a better medication, and one that had only positive effects on my baby.