You are here: Home / DIET / Where is Your Meat Coming From? 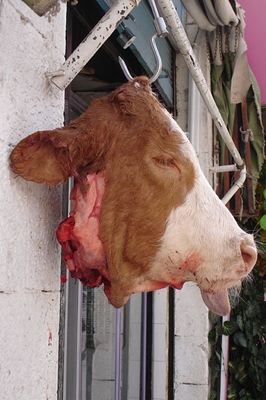 An alarming video captured by the Humane Society of the United States showed workers at a meatpacking company forcefully moving sick animals for slaughter. This not only broke animal cruelty laws, but it also raised a health hazard for those who consume beef. Worse yet, this particular meatpacking company is a supplier of beef to school systems throughout the country.

Does this mean you should stop buying beef or meat altogether?

Well, you certainly deserve to know of healthier ways to consume it…

Update: Meat in Grocery Stores to have Labels

Almost six years after this post was first written, I read an article in The New Yorker that:

Companies that sell meat in grocery stores will have to label where the animal was born, raised, and slaughtered. It used to be enough to know that you were buying a hamburger or a steak. Since 2009, meat companies have also had to provide some vague information about origins—for instance, that a product came from North America. Now, you’re about to discover the whole life story of the animal you’re about to eat—and often you’ll learn that it came from abroad.

Finally, this is a good step in the right direction for people who care about where there meat is coming from. However, according to the same article, this labelling rule that is set by the US Department of Agriculture (USDA), applies only to grocery stores for now, and not to the restaurants and other food serving places. At those places, like pointed out earlier above, you may start asking questions about the quality and origin of meat being served to you.