You are here: Home / Brewing / Close-Up on Yellow: The “In-Between” Tea 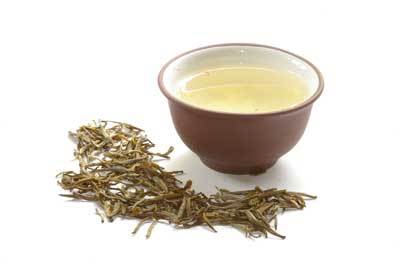 The next tea on our list is a little known “in between tea” – the Yellow Tea. Yellow Tea is hard to produce and is only found in a few places in China and sold in even fewer places around the world.

For Emperors, Craftsmen and Connoisseurs

In terms of the process it goes through, yellow is a step in-between green and oolong teas, and I would argue that it is also delicate and subtle like a white tea. This tea was once for Emperors, craftsmen and connoisseurs only: Some say that yellow tea was produced specifically for connoisseurs who asked their suppliers to remove the grassy flavor from green tea, but still maintain the health benefits of the leaf. Others say it was made by craftsmen who found that, through a longer period of oxidation, they could create a tea with a golden color and a sweet, subtle taste.

Tea Craftsmen of the Tang Dynasty

The tea farmer that first introduced me to yellow tea said that tea craftsmen were making yellow tea back in the Tang dynasty and that we today have lost the recipes for countless other varieties of tea that were once brewed and enjoyed by the scholars of old. This tea farmer and his contemporaries spend a lot of their time sifting through documents, trying to re-discover old tea blends.

Aromatic with a Hint of Sweetness

Yellows are produced in the same regions that produce good greens: Anhui, Hunan and Sichuan. The basic process involves roasting the leaf like a green, but then fermenting the leaf for a period of time – from 2 days to a week – to stimulate oxidation. When a tea oxidizes, it is basically being cooked by oxygen. Another way to out it would be that yellow tea stews in its own juices for a period of time and through that process gains a darker golden color and a different taste. It becomes a bit more aromatic with a hint of sweetness.

Yellows might be a good tea for Westerners, because some do not like the grassy flavor of green teas, but they want the same health benefits that green tea provides. White teas are popular in theory, but in practice, I have noticed most people in the USA drink one or two sips of white tea and look somewhat confused, because the taste of a white tea is too light.

People don’t really taste anything. Blacks and blends are of course popular, because the aromatic taste of a good black resembles some coffees, and blends usually use familiar tastes like orange or cinnamon or a flower of some sort. Oolongs require a whole different process and we’ll talk about that next week.

Yellows might just be the “in-between tea” that people here in the US could enjoy for both taste and health benefits. If you are going to try a yellow tea, brew it the same you would a green: hot water from 80 to 90 degrees Celsius, in a glass or a Gaiwan cup.

Yellows are supposed to be a bit hardier than a classic green, so you might be able to steep a yellow a few more times – maybe 4-5 times – and if you let the tea steep longer, the flavor should get strong. I have had a few Yellows from Sichuan Province and I noticed that they like to steep a bit longer. Try one out if you get the chance and enjoy!