You are here: Home / Ayurveda / Yummy, Yummy Cinnamon! It’s Actually Good for You 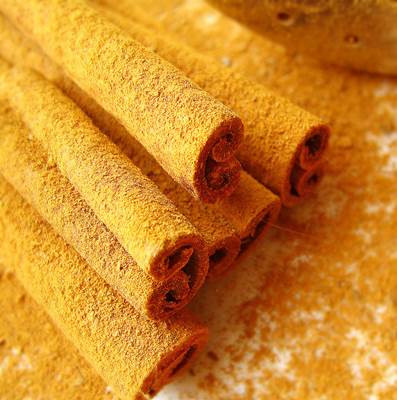 I’m always surprised when I find that a common ingredient I keep around the house anyway has an undercover health benefit. In our spice racks, we have many potent flavoring agents – sweet, salty, and bitter – but only one of them, Cinnamon, has been in the news lately as a natural preventative agent against high blood sugar and cholesterol, which are two of the biggest health concerns around. Read below about how this sweet-smelling spice from Ceylon (or Sri Lanka), that we all know from apple pie and Chai, is good for your health.

Let me start by telling you that the cinnamon you most likely have, in powder form or in sticks, is actually cassia (Cinnamomum aromaticum), a spice in the same family as “true” cinnamon (Cinnamomum zeylanicum) but much less expensive. Cassia is harder and darker in color, and has a slightly different chemical component; most of the anti-diabetes research that has been conducted using cinnamon actually used cassia, so when I refer to cinnamon in the article, I will do the same. When referring to “true” cinnamon, I will use the term “true”.

Historically, both kinds of cinnamon play an important part in several prominent medical traditions, including Tibetan, Ayurveda, and Chinese medicine. It has been used to treat a variety of symptoms, including indigestion, toothache (due to its antibacterial as well as its numbing effects), and “warming” the body of those with poor circulation. Modern science corroborates much of this, as cinnamon contains several chemical compounds that could be effective in treating these symptoms.

But back to the point – how does cinnamon affect sugar and fat in the blood? Basically, it has a regulatory effect – it can reduce blood sugar, though it doesn’t affect levels of hemoglobin A1C, which is a genetic marker present in diabetics. Cinnamon shouldn’t be used with anti-diabetic medicines, because glucose levels would dip too low; those considering using it in place of medicine should have a careful grip on their diet and exercise plan.

While cinnamon can be helpful for those with type 2 diabetes, it is definitely good for non-diabetics who wish to regulate their blood sugar levels for health. In addition to regulating levels of blood sugar, cinnamon also has a lowering effect on triglycerides, meaning that it can be useful as a long-term preventative measure against cholesterol.

A couple words of warning – first, cinnamon (only the cassia variety) contains a compound called coumarin, which is both good and bad. It is antifungal, which can be good for treating yeast overgrowth, but it also has a blood-thinning effect. For this latter reason, people with blood disorders, or people who are on blood thinners already, should not take therapeutic doses of cinnamon.

Second, when I talk about taking cinnamon, I mean taking the actual powdered spice, not the essential oil: the sugar regulatory benefits come from the physical spice itself, not from the compounds in the oil. In fact, the oil can be toxic in higher quantities. If the thought of ingesting cinnamon powder sounds strange or cumbersome, you can find capsules of cinnamon in your local health food store.