You are here: Home / Aging / Anti-Aging Naturally – Does Resveratrol Reverse It All? 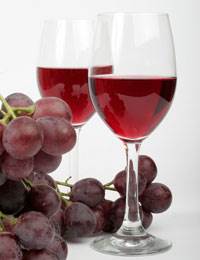 I briefly touched upon this seemingly too-good-to-be-true phytoalexin when I wrote my holiday post about the antioxidant effects of red wine in the winter, but it seems like lately it’s been in the news more often, so I wanted to give Skrewtips readers the lowdown. Is resveratrol all it’s been hyped up to be, or is it just another anti-aging hoax pulled on a generation that’s afraid of getting older?

Resveratrol is an antibiotic substance present in several different plants, including the skin of red grapes and in Japanese knotweed (Ho shou wu). It’s released as a defense mechanism when the plant becomes under attack by fungi or other threats, and acts as a toxin to counteract the invading agent. In small organisms such as nematodes and short-living fish, resveratrol has been shown to increase lifespan. It has also proven demonstrably effective at regulating cholesterol and blood sugar levels in larger organisms such as mice – a 2006 study showed that it counteracted the effects of a high-fat diet in rodents.

Research is still inconclusive in humans, but resveratrol does show very promising results as an effective antioxidant in that it inhibits free radicals in a test tube setting. However, when consumed, resveratrol levels are lower in humans, so effectiveness as an antioxidant is about the same as vitamin C.

However, resveratrol is a very effective at inhibiting growth of cancer cells as well as invasive tumor cells in animal subjects, and has shown an excellent track record at reducing inflammation. These appear to be great effects and promise a lot about resveratrol; still, it’s important to note that the tests that have been done were administered in clinical settings at much higher doses than the average human consumption of resveratrol, from red wine or otherwise.

It’s NOT an Anti-Aging ‘Miracle Cure’

When it comes down to it, there’s no miracle cure – no one thing is going to stop us from aging permanently. Resveratrol sounds wondrous when we think of the “French Paradox” which refers to how French people drink and smoke, on average way more, yet have 20-30% less cardiac-event related deaths than people in the USA. Some have begun to consider resveratrol’s role in this.

But studies show that people who prefer wine as their choice of alcoholic beverage also prefer to eat healthier otherwise, consuming more fruits and vegetables, exercising, and watching their weight in the process. This means that overall, in a healthy diet, the role of resveratrol is maximized. It’s allowed to bolster an already healthy immune system – and that’s what we all want.

Heidi Godman, Executive Editor, Harvard Health Letter, has reported the latest research results from a study on resveratrol in an article. Here is an excerpt from and link to the same:

Resveratrol, an antioxidant found in red wine and certain foods, has been touted as a natural way to slow aging and fight cancer, obesity, heart disease, and diabetes. As promising as it sounds, we don’t really know how resveratrol affects humans, since most studies have been conducted on animals and microbes. So a study out this week that looks at resveratrol’s effect on people from two villages in the Chianti region of Italy—where they know a thing or two about red wine—got my attention.