You are here: Home / Acne / Coconut Oil: for the Inside and Outside 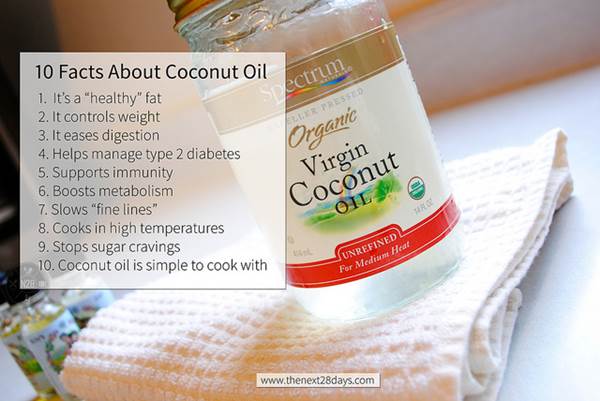 Coconut oil is a controversial fat: is it good for you, or not? A main staple of some Asian and Pacific diets, coconut oil comes from coconuts themselves and like olive oil, has several “grades” of purity, with the purest being virgin. Unlike olive oils, however, which each have their own purpose, you should always select the purest coconut oil you can find; the partially hydrogenated coconut oils aren’t as beneficial as the virgin. This high grade of coconut oil has a pleasantly nutty flavor and can be used to cook anything you would cook with olive oil.

Read more about the health benefits of coconut oil below:

Coconut oil does contain a high proportion of saturated fat, which should generally be avoided in high quantities. But what makes coconut oil different from any other fats is the length of the carbon chain that makes up the “backbone” of its molecule. Coconut oil consists mainly of a specific group of fat molecules called medium-chain fatty acids or MCFAs. The majority of the fats consumed by humans contain long-chain fatty acids (LCFAs), and the two kinds of molecules are processed completely differently in the body. LCFAs get absorbed into the lymphatic system, where MCFAs go to the portal system.

Due to this fundamental difference in processing and absorption, coconut oil is successfully used to treat patients with malabsorption issues. But what does it mean for an ordinary person? Should we all switch our cooking fats to coconut oil? Well, there’s good reason to believe the stuff is healthy for you in many more ways.

First of all, research indicates that coconut oil has antimicrobial effects, when consumed, due to the concentration of lauric acid it contains. This is because the lauric acid is converted by the body into monolaurin, which is thought to help fight bacteria, fungi, and other invasives. Though verified research on this topic is still somewhat scarce, many groups of people argue for the benefits of coconut oil — including other benefits such as heart function and even treatment of HIV.

Coconut Oil as a Moisturizer

One thing is for certain: coconut oil is excellent externally. It’s good for the skin, especially during those dry summer months; you can apply coconut oil as a moisturizer to soothe and protect chapped skin. Or, you can even make your own moisturizer using coconut oil, olive oil, cocoa butter and other easy-to-find ingredients. That way, you’ll know exactly what’s in your product and keep it all natural.

Yes! Coconut oil can help combat that irritating problem, acne. Although it seems counter-intuitive to put oil on acne-prone skin, many reviewers rave about the awesome results of this natural remedy. Actually, acne is caused by an infection in your own skin’s oil-producing glands, and coconut oil contains anti-microbial agents that help to fight the infection. It also absorbs quickly, going to work right away. At the same time, the emollients in the oil work to keep the rest of your skin healthy and bouncy. When it comes to skin care, coconut oil hits two birds with one stone.