You are here: Home / Ancient Herbs / Echinacea: The Herbal Heavyweight 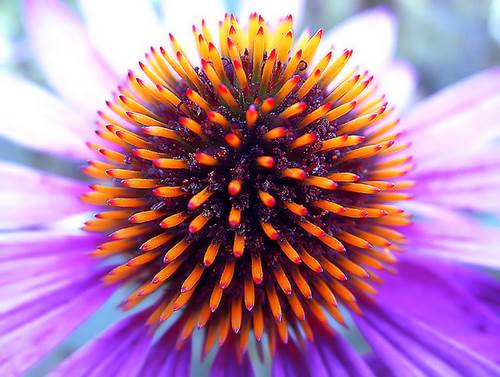 The Purple Flower of Health

Echinacea, commonly referred to as Purple Flower for the color of its florets, is a member of the Asteraceae family and grows perennially. The name is a derivative of echino (Greek for “spiny”) in reference to the flower’s conical head of prickly seeds. It originated in North America and was used as a cure-all by the North American Plains Indians for more than 400 years.

Echinacea became widely used as a form of medicine in the United States during the 18th and 19th century, but has since declined, most likely due to the development of modern antibiotics. Despite the decline, Germany has taken interest in Echinacea and has become one of the leaders in researching the medical benefits of the plant.

Of the nine echinacea species, the following are used for medicinal purposes: Echinacea angustifolia, Echinacea pallida, and Echinacea purpurea. Echinacea is widely considered an immunostimulator, helping to prevent and fight illnesses such as the common cold and flu.

“One phytochemical, inulin, improves the white blood cell’s ability to speed to and tackle infections (whether viral, fungal, or bacterial), in part by increasing the level of a substance called properdin. The plant also increases the number of white blood cells in your immune system and activates them.”
– James A. Duke (The Green Pharmacy Herbal Handbook)

Echinacea is Second Only to Garlic

The ‘Purple Flower’ also contains active properties to relieve pain, reduce inflammation, and has antiviral and antioxidant effects. Many of its medical benefits have been heavily debated, especially its effectiveness on the common cold.

Studies by the New England Journal of Medicine and the University of Virginia’s School of Medicine both concluded the plant to have no clinically significant impact on the treatment or prevention of a cold. After comparing the results of 13 European studies, however, a University of Maryland review claimed Echinacea reduces the duration and symptoms of a cold.

As a result of conflicting research and the continued support of herbalists, the plant is still used for its medical benefits. According to Duke, it is the most popular herbal supplement in the United States today; Echinacea is only second to garlic as the best nature has to offer.

Other Uses of Echinacea

Herbalist may recommended Echinacea to treat a variety of ailments including athlete’s foot, ear infections, hay fever, vaginal and urinary tract infections among others. It is believed, on the basis of many laboratory and animal studies, that it produces substances that may boost the immune system, reduce inflammation and help in pain management.

A list of what people use Echinacea for has been provided by Medical News Today:

Echinacea is widely used all over the world today for a wide range of illnesses, infections and conditions. Below is a list – apart from some studies quoted earlier on in this article, most of the benefits claimed have been anecdotal; this means that in the majority of cases, the benefits have not been proven scientifically to be effective or ineffective.

Echinacea is used by people today for:

What Is Echinacea? What Are The Benefits Of Echinacea? – Medical News Today