You are here: Home / Bad Breath / Fennel: A Sweet Remedy for Digestive Distress 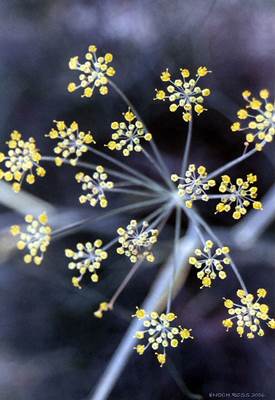 Many of us know and love fennel in our favorite Indian foods; if you’ve been to an Indian restaurant, you’ve also seen it on the table after meals, along with other spices and sweets (most often cloves and tiny sugar candies). There’s a good reason for its standing invitation at the table: fennel, with its mild, sweet, and pleasant licorice flavor, helps to freshen the breath after all those onions and spices. However, fennel has some other very useful food-related effects: it can help to relieve bloating and gas, stimulate the digestive system, and aid in general food absorption.

The three common types of fennel – peppery, sweet and bitter – all have the same outstanding digestive and medicinal effects, and fennel is widely available prepackaged in the spice sections of most shops. It may be helpful to know that the yellowish fennel is generally stronger in anise flavor and so it’s best used for cooking. But the greener fennel is softer, sweeter, and perhaps more suited for oral consumption and preparing infusions. Fennel can be eaten raw as a seed, brewed into a tea (leaves or bruised seeds), or lightly toasted and ground up as a spice.

Fennel (Foeniculum vulgare), like its similar-tasting cousins anise, star anise, and licorice, helps activate the digestive enzymes in the stomach because it has carminative properties. For this reason, fennel is particularly good after a meal. Its carminative properties also make it act as an anti-spasmodic, relieving stomach cramps and pains as well as gas.

For women, fennel can help ease troubling menstrual cramps because it relaxes uterine muscle spasms. Fennel also has a mild estrogenic effect, which means that it can be helpful in stimulating the production of mother’s milk – and the beneficial effects of fennel pass naturally through to the infant if the mother breastfeeds. Because of the estrogenic effects, fennel can also be useful for women undergoing menopause as it may help to relieve some of the symptoms. In larger doses, fennel can also stimulate the onset of periods; this means fennel should never be taken medically by pregnant women.

Fennel is suitable for children and babies, and can be given as a mild infusion that can help relieve gripe, colic, and other digestive issues.

For infusion, brew one to two teaspoons of fennel seed in boiling water for several minutes or to taste; sweeten with honey if desired. A maximum dose of 7 grams is appropriate; anyone allergic to celery, carrots, dill, or anise should avoid fennel. A fennel infusion can also be used as a gargle or a mouthwash, to freshen the breath and to help relieve a sore throat or mouth ulcers (canker sores).

On an anecdotal note, I found that chewing a couple of fennel seeds can also help with cankers, as fennel has a slightly numbing effect in the mouth (I came up with this from desperation once when I suffered from a very tenacious canker). Some say that the seeds are sharp and can cut the mouth; however, I found the numbing benefit outweighed this risk – just chew carefully and combine with baking soda rinses at night and in the morning. This way, you can avoid nasty-tasting medical balms while your canker clears away, and do your digestive system a service at the same time.