You are here: Home / Aging / Ho Shou Wu: Should You? Ancient Herb for Longevity and Hair Restoration 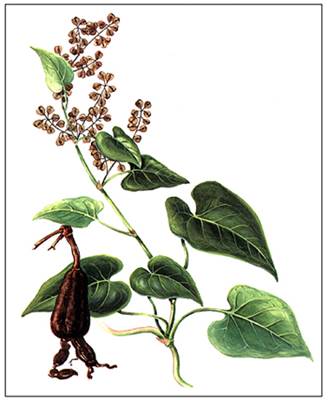 Have you ever heard of Ho Shou Wu? I first looked up this fascinating herb after a friend recommended it as a way to combat against stress-related hair loss. Turns out that this herb has quite a history.

An Effective Herb with Different Names

Ho shou wu, known in binomial nomenclature as Polygonum multiflorum, is also referred to as as fo-ti, and sometimes as Chinese Knotweed (for its bizarre, lumpy root structure); sometimes you might see it also packaged under the names fo-ti teng or he shou wu. Fo-ti is a name that was invented by, or for, Westerners and has never been used in Chinese nomenclature. This sheer confusing multitude of names does a disservice to an effective herb, and it’s perhaps one of the reasons that the herb isn’t widely known as a hair tonic in Western society.

Once Upon a Time, Ho Shou Wu was……

Once upon a time, though, ho shou wu was a crucial part of the ancient Chinese apothecary. Its delicate flowers and rapidly vining stalks were a common sight, and it was second only to ginseng in its variety of uses. Ho shou wu was, and still is, used to treat the common ill effects of old age, including appetite loss, sexual dysfunction, and, most interestingly, hair loss.

In fact, the name translates to something like “black-haired Mr. Ho” and refers to a man who was reportedly the first consumer and advocate of the herb. This man reportedly lived to be very old, and his hair never grayed. The story sounds like the tallest of tales, but all tales start from somewhere — so it’s worth it to examine some effects and properties of ho shou wu.

In Chinese medicine, it is believed that a person’s appearance reveals their internal condition – not really such an outlandish claim! – so if a person is losing hair, it is the result of some kind of internal imbalance on the inside. Ho shou wu has been around since at least 800 AD, when it was first described in medical writing, though it’s probably older than that. Ho shou wu has been re-incorporated into many anti-aging and longevity formulas in modern Chinese medicine.

How Does Ho Shou Wu Work?

Ho shou wu acts as a stimulator of the cardiovascular system and enhances immune function; this is because – in terms that even the modern Western scientist can agree on – ho shou wu boasts a high concentration of stilbene glycosides that are similar to resveratrol. Yes, this is the same powerful antioxidant that’s found in, you guessed it, red wine! It has properties that prevent arterial clog and stimulate blood flow, and it’s been shown to reduce cholesterol. Resveratrol is one of the new hot buzzwords on the market, and ho shou wu is a good source of it.

The additional blood flow to the scalp could be a possible solution to the problematic hair loss. I’m not sure I’m convinced that this herb will make me live longer or keep my hair from graying, but given its proven antioxidant powers, it certainly couldn’t hurt.