You are here: Home / Autism / Wake Up to World Autism Awareness 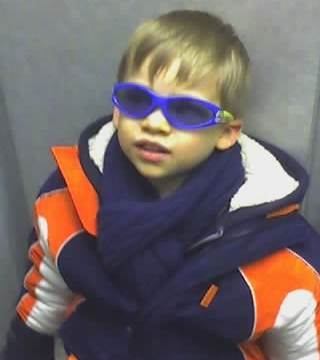 Today is World Autism Awareness Day, and I am smiling because my son just counted the cucumbers on the counter-top. He also picked up the newspaper and said “Al Gore”. He’s 3 ½ years old and has what the world is currently labeling as “autism”. And, I am smiling because this child was not talking or making eye contact a year ago. I smile because he hugs and kisses me now. He initiates conversation and play with others. There’s a sense of peace that radiates through him.

He also memorized every word of every book we ever read, knows how to count to 20, can read many words and spell even more, sings “Gold Digger” by Kanye West, thinks Gwen Stefani is his girlfriend, says the word “Thomas” (after Thomas the Tank Engine) repeatedly, and lines up all of his toys in the form of a train.

The Blessing Behind it

A mind this magical is both a blessing and a message. And, on this Autism Awareness Day, I want you to become aware that autism has many faces, many symptoms and many dreams. If we battle autism, we fail to cherish the blessings of it and may misconstrue its true message to the world. And, I am by no means implying that any child or adult deserves the physical, emotional and social pain that is connected with autism.

Eckart Tolle’s “A New Earth” suggests that waging war on anything has historically been unsuccessful – think about it. Can you name a war that turned out positively? Think: the war on drugs, the war on poverty, the war on hunger. There is nothing about the essence of my son that is poisonous, strange or unequal. But there is a poison in his body that continues to evaporate as we continue to learn how to heal him.

My belief is that autism was put here to urge drastic change in the world. It’s no secret that electromagnetic fields, heavy metal toxins, smog, chemical food additives, processed foods, genetic engineering, and many such “modern conveniences” play a role in the destruction of our children’s immune systems. Most current cases of autism are linked to an immune system that has been assaulted since conception. Those patients who are properly tested show candida, bacterial dysbiosis, mercury, lead, and aluminum poisoning, parasites, viruses, strep, congested livers and more. Each one of these factors can lead to candida overgrowth and the inability to digest proteins like gluten and casein – which is why diet changes seems to work so well.

Our children’s bodies are rejecting foods like wheat, milk, soy and corn because their inner-ecosystems have been destroyed while we have been simultaneously filling our garbage dumps with toxic waste and genetically modifying commodity crops for the sake of cash. When the body cannot digest the wheat protein, gluten, one will often display symptoms known in the autism community as stimming. These are repetitive behaviors that can be dangerous to the individual (like hand flapping, toe walking or head banging). Enough “poison” can send the individual into a daze or state of depression, confusion, tantrums, and inability to focus. Almost all outward symptoms of autism can somehow be linked to the affects these poisons have on our bodies. Pretty scary, huh? How drastic do the statistics have to become before we realize that as we kill our planet, we are destroying our people?

If we continue the cycle – if we allow our children to be born with weak immune systems, into a world full of toxicity — and then immunize them, feed them soy formula and microwave their lunches – we are headed to a world with more autism. And in this dreaded world, we will not be able to see the blessings as clearly. Now is the time to really become aware of what all of our children need. And, that is a chance to really be themselves. As I uncover my son from the autism label, I see a mind so powerful. A mind that has the key to a better world.

What Can You Do?

If you want to really do something, you must become aware. Wake up and see that challenges are given to us for a reason. Disease is a sign that we can change things. And the many children breaking out of autism are prime examples that if we change the way we live, we will live in a better world.

I will have lots more to share with you on this topic throughout the month of April.

In the meantime please check out:

Age of Autism, a reliable journalistic source for autism.