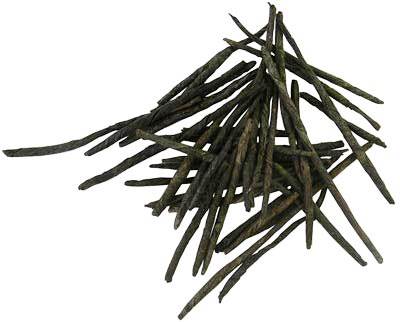 Yesterday, I drank several cups of Hainan Kuding Cha just to remember why I loved the tea so much. Since being back in the US, I have shied away from the bitter teas, because I assumed that most of my friends would find it hard to swallow (both literally and figuratively).

But then I poured a few cups, and watching the Hainan variety unfurl in slow elegant twists and starts caught every one’s attention. As the hard dark green stick became a bright emerald leaf with small serrated edges sparkling in the hot water, the distinctive aroma crept out of the cup and diffused out across the table.

People murmured in curiosity and wonder. What was that smell? Rain on the sidewalk? the wind before a storm? that cough medicine we all loved to hate? My friends leaned forward and sniffed at my glass and eventually pried it away from me so they could taste this “tea” they had never tasted before. The murmurs were now sharper, higher, accompanied by a tilt of the head and a penetrating, focused furrow of the brow that bespoke familiarity and yet the delightful experience of tasting something quite new and not utterly revolting.

I must say I was very proud of the little Kuding leaf and glad that my friends could appreciate it as much as I do. Kuding tea (bitter tea) is grown all over China, in two distinct varieties. The Sichuan variety, which I know very well, is called Qing Shan Lui Shui (Jade Mountain Green Water) and the Hainan variety is just straight Ku Ding Cha (bitter nail tea). They are very different in appearance and slightly different in taste. Both have an immediate sharp “arrow at your tongue” taste that washes through your mouth and then turns into a faint, disappearing sweetness as it slips down your throat.

I have never seen anyone take their first sip without making the “Kuding Face”, which is at once startled and bemused and intrigued. I love Kuding Cha of both the Sichuan and Hainan varities because I can truly feel the cleansing process going on in my mouth, sinuses and throat. I can feel the warmth of the tea in my chest and belly. I can feel my eyes sharpen and my brain focus. These might all be placebos, but I have felt it every time and I enjoy the feeling and have become accustomed to it. If it is all in my head, then so be it.

Kuding is drank widely across all areas of China for its medicinal properties. Old men swear by it. According to Chinese medicinal lore, Kuding Cha invigorates the eyes, mind and mouth; cleanses the mouth and throat of phlegm; stimulates digestion; helps against head, nose and chest colds; quenches thirst and alleviates dry throat problems; helps with diarrhea and stomach problems; and contains the same level of antioxidants found in many teas.

From the Wax Tree

Kuding Cha does not come from the tea plant but rather from a species of either wax tree or holly. In Sichuan, the Wax tree is grown alongside tea bushes and the leaves harvested at roughly the same time. Some growers believe there is a symbiotic relationship between the two plants, with “characteristics” being passed through the soil. Perhaps.

What all growers agree on is that Kuding is an acquired taste and a thirst-quenching tea that is vital if one wishes to live long. In China, an old man without Kuding is an old man looking for Kuding. Give this tea a shot if you can, a few leaves (the Hainan variety are sticks, maybe 1-2 sticks per glass) in a glass with 85-90 degree water and let steep for a few minutes. The tea can be steeped until the sweet aftertaste is gone and then it is over. I like to keep drinking until the bitterness is too much.