You are here: Home / Brewing / Close-Up on Yak Butter Tea 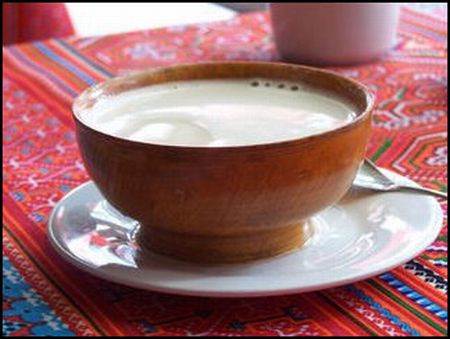 Much of the tea that crossed the border from China into Tibet over the centuries was destined for the cups of nobles and lords. The local Tibetans in the highlands learned that although the tea from China was nice, the best tea was their own and the best way to brew tea was to infuse it with the butter from their herds and churn it in yak horn cylinders until a smooth, rich, foamy consistency was reached. Every Tibetan I have ever met, drinks it continuously and urges onto everyone whom he might meet.

The tea used for yak butter tea most probably comes from the mountains just west of Yunnan and Sichuan. What I have seen is a dark, formidable leaf with an intense flavor bordering on bitterness and smoke. There may be a region called Pemagul that supplies the tea for yak butter tea, but I have never been to, or actually read anything about, to confirm the existence of Pemagul.

I do know of a company based out of Sichuan that sells Tibetan medicinal teas made from plants grown in the higher altitudes west. That tea is a bitter, maroon drink with hints of scarlet. It has a dry aftertaste and seems to be a refined version of the tea used for yak butter tea. The Chinese and Tibetans believe that this bitter tea helps with indigestion, bowel troubles, lack of focus or energy and also with vision.

The market is aflush with tender greens and shining whites and oolongs with great body, but no one is selling (or buying) the hardy leaf the Tibetans use for their creamy drink of choice. This type of leaf is truly medicinal, often mixed and ground down with other herbs to make elixirs and potions that traditional Chinese medicine has found to be effective in keeping a man healthy.

A Perfect Tea for Mountain Areas

For Tibetans on the plateaus, the drink might help them deal with a diet of tsampas (barley, salt and yak butter tea) and/or yak meat. Many Tibetans are vegetarians, and nomads in Kham rely on yogurt, milk, butter and tsampas. The bitter tea helps keep energy up, metabolism working and the brain clear while the buttery thickness of the yak butter adds reserves and warmth. A perfect drink for a mountain area.

The process for making the tea involves steeping the tea leaves in hot or boiling water for hours. After the brewer has made a suitably potent stock, the brew and the leaves are placed away for use later. When it comes time to drink, the brew is placed together with a hunk of butter, a spoonful of salt and a cup or so of milk into a cylinder called a chandong. There is a pump in the chandong which the brewer uses to churn the ingredients together vigorously for as long as he sees fit. The longer the better.

Yak butter tea is then served in porcelain cups, filled to the brim, often with candy or sweets of some kind, almonds and maybe tsampas. Tsampas are balls of doughy goodness made from barley flour mixed with a splash of yak butter tea.

The Tea House in Tibet

In Tibet, I have seen the tea most often poured from iron pots. A central brewing station, hissing and bubbling, is tended by the proprietor of the tea house, who keeps the pots hot and ready. A tea house in Tibet is warm and steamy and the cups are never empty. It may be an acquired taste in lowlands like Chengdu or Portland or Atlanta, but if you are in the cold, surrounded by peaks and sky, then you will want a buttery mixture like the Tibetan national drink on hand. It also keeps your lips from chapping.