You are here: Home / Cancer / Food Dyes can Change the Color of your Colon 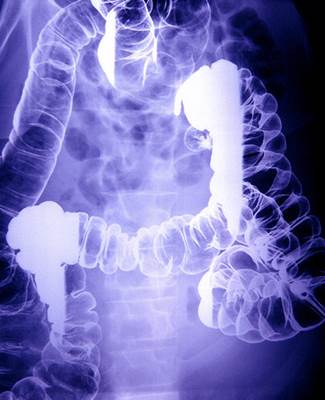 I’ve heard some interesting stories about colons, especially the popular myths claiming John Wayne and Elvis Presley’s autopsies revealed an excess of 20 lbs of fecal matter in their colons. (John Wayne didn’t have an autopsy and Elvis had an enlarged colon due to drug abuse). But, according to an article in the Archives of Pathology and Laboratory Medicine, a blue colon was discovered during the autopsy of a 50 year old woman.

The woman, mentioned above, had been hospitalized and was receiving liquefied food containing FD&C Blue No.1 or “brilliant blue” with a 1:10 ratio (food coloring:food). The authors referenced another article in which green colons were found in the autopsies of a 49 year old male and 85 year old male, who also received the same blue liquid diet.

It’s debatable as to whether the blue dye directly contributed to the patients’ deaths since they were critically ill upon admission to the hospital and ingested the diet for a short time. But, the findings undermine the claim by the Food and Drug Administration that the dye is “nonabsorbable”.

Commonly used food dyes, such as Yellow 5, Red 40, and six others, are made from petroleum and pose a “rainbow of risks.” Those risks include hyperactivity in children, cancer (in animal studies), and allergic reactions. In 2008, because of the problem of hyperactivity, the Center for Science in the Public Interest petitioned the Food and Drug Administration to ban the use of these dyes. The British government and European Union have taken actions that are virtually ending the use of dyes throughout Europe.

– Center for Science in the Public Interest

“Brilliant Blue” food dye has officially been deemed “safe” after once being banned by many European countries, but animal tests still suggest a small cancer risk. Since 1919, 19 food dyes have been banned and 11 were conclusively shown to cause cancer. Other synthetic food dyes, specifically Blue No. 2, Green 3, Red 3 and Yellow 6, are still available for consumption although studies have linked them to cancer.

At the very least, there’s no good reason not to ban Red 3, something then-acting FDA commissioner Mark Novitch tried to do in 1984, saying the dye “has clearly been shown to induce cancer” and was “of greatest public health concern.”

Since “brilliant blue” is available in most sodas, candies and baked goods, it is estimated that the average American consumes 16 mg of the dye per day. It’s safe to say that the colored organs of the patients were an acute overdose of Blue No. 1, since the color fades over time. But, what about the rest of us that consume 16 mg of Blue No. 1 a day . . . are our colons navy blue or aquamarine? I would rather not wait to find out and get my daily blues by listening to B.B. King and eating blueberries instead!