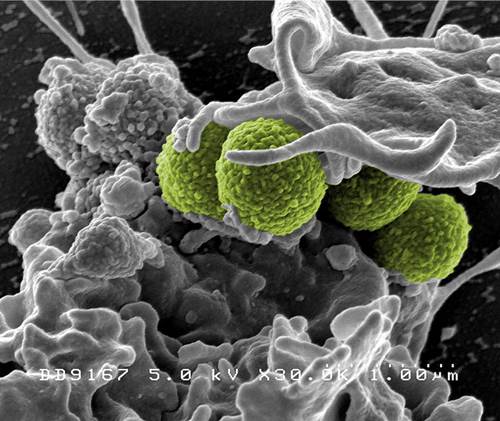 Interaction of MRSA (green bacteria) with a human white cell. The bacteria shown is strain MRSA252, a leading cause of hospital-associated infections in the United States and United Kingdom. Image Credit: NIAID

Methicillin-resistant Staphylococcus aureus (MRSA) is a serious public health concern. It’s getting progressively worse; in fact, it actually exacts a greater death toll than AIDS and other “modern plagues”!

Staph bacteria are usually relatively harmless – up to 30 percent of individuals carry them in their nose without them causing an infection. The bacteria may enter your body through a cut and cause an infection, but even these are usually mild and are easily treatable.

However, MRSA is much more dangerous than typical staph bacteria for it has become resistant to the broad-spectrum antibiotics commonly used to treat it. It’s constantly adapting, becoming more and more capable of outsmarting even new antibiotics on the market.

Here are some common-sense approaches to prevent MRSA and greatly hinder the spread of infections:

1. Be wary of antibiotic use:

Antibiotic use should be taken seriously; it must be addressed on a large scale, within agriculture and modern medicine. Start with yourself: evaluate your own use of antibiotics, and refrain from taking or administering them to your family unless absolutely necessary (consult your physician on this).

This is among the oldest, most effective antibacterial treatments, and it may be the key to preventing MRSA. And since failing to wash hands properly is the most common violation in hospitals, be very careful about choosing your own doctor.

Wash your hands for 10 to 15 seconds using warm water and plain soap. Clean all the nooks and crannies of your hands, and don’t forget your fingernails! Rinse thoroughly under running water. If you’re in a public place, use a paper towel to open the door in order to protect yourself from germs present on handles.

Antibacterial soaps are not advised – they are completely unnecessary and could actually do more harm than good. Their antibacterial compounds are a potential contributor to the spread of antibiotic-resistant bacteria. Refrain from being obsessed with handwashing though, as too-frequent handwashing can extract many of the protective oils in your skin, cause it to crack and bleed, and compromise your skin, your primary defense against bacteria.

Did you know that MRSA can be effectively spread by contact with contaminated matter? Keep your personal belongings safe by using them for yourself. These items include towels, bed linens, clothes, fitness equipment, and razors.

5. Make use of natural disinfectants:

It will be useless and downright harmful to use antibacterial house cleaners. Instead, go for a naturally all-purpose cleanser to clean up kitchen counters, kitchen items like cutting boards, and bathroom surfaces. Use three percent hydrogen peroxide and vinegar, putting each liquid into a separate spray bottle, and then spraying the surface with one followed by the other.

Allicin, the active compound in garlic, is a natural and effective antibiotic that can kill antibiotic-resistant bugs such as MRSA. It is important though that the garlic is fresh, because the active ingredient is destroyed within an hour of smashing the garlic. For this same reason, garlic pills are virtually useless and shouldn’t be used.

Here’s how to use garlic: compress it with a spoon prior to swallowing it (if you’re not going to juice it). Doing so will convert the allicin to its active form.

7. Use door handles, taps, and light switches made of copper:

According to scientists, copper fittings rapidly kill bugs in hospital wards, even outperforming other infection control measures. Additionally, lab tests show that the metal can effectively kill off MRSA and other risky germs such as the flu virus and E. coli. If you have someone at home with chronically poor immune function, making this switch to copper may be a good measure.

Katrina Pascual is a Web copywriter who researches natural prevention on common infections such as colds, the flu, and the far more dangerous ones like MRSA. She subscribes to numerous natural health newsletters, such as the daily newsletters of Dr. Joseph Mercola.