You are here: Home / Cancer / Roundup Ready Plants are Deadly, Not Friendly 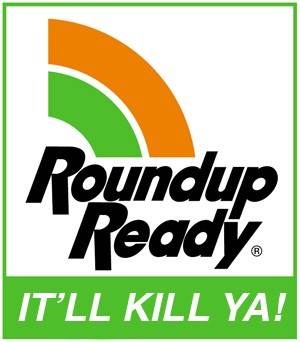 The fruit fly gene attached to the tomato is poor farming. GM (Genetically Modified) plants, from my understanding, are created mostly to be resistant to Roundup. Weeds are an enemy of large and small scale farms.

Crops with Roundup Ready plants can be sprayed with Roundup Herbicide and not kill Genetically Modified plants. Sounds too good to a farmer that struggles with weeds. The problem is what really happens. Roundup, the herbicide, has apparently been linked to birth defects and reportedly banned from use in provincial areas in Argentina where GM soy is grown.

The Dangers of 24d Herbicides

Reports say that local doctors, when GM soy was introduced into their areas, noticed an increase in miscarriages and birth defects. Studies were done that shed poor light on this supposedly safe to use Roundup. Another problem with using Roundup herbicides is that after a while the farmers’ land becomes at threat from Roundup resistant weeds. These weeds may be stronger in structure and farmers are being advised to use potentially more dangerous herbicides like 24d.

Apparently motor neurone disease is affecting workers in the 24d factories at a higher rate than others in the community. In Australia, recent reports have been aired on pesticides that cause cancer in the workplace. It is no surprise that 24d has been placed on top of the list. Monsanto is apparently making GM corn seed that is resistant to 24d. The problem goes on and on with GM food.

Luckily, like most problems, there is an easy answer. Tomatoes for instance. The big red tomato is a bug paradise; so grow roma, egg, or varieties of cherry tomatoes that the bugs don’t trash so easily. A farmer that lived near my home grew big red tomatoes and sprayed heavily for fruit fly. I had pigs and offered to remove all the spoiled tomatoes that were left on the ground at the base of the plants. The farmer told me that after I started removing these tomatoes he didn’t need to spray as much.

My pigs ate the tomatoes and the fruit fly didn’t get a chance to hatch and attack his good tomatoes. This is not rocket science but common sense. For weed control, farmers should use mulch – it attracts worms, that increase aeration, drainage, and provide nutrients. Mulch saves a lot of watering and also provides protection from erosion.

Farms Are Way Too Large

The real problem is not the weeds or bugs, it is the size of the farms. 100 acres of any crop is too big. Instead there should be 50 farms growing 2 acres of fruit or vegetable. 50 families benefiting is better than just one family. The other problems occur off the farm: middle men, lack of government support, no processing plants that remove spots or blemishes and make frozen produce, dried produce or sauces etc.

In Australia last year, there were only three industries that were growing in our poor economic conditions and one of them was organic produce. The organic fruit and veggie markets have told me there is huge demand for organic produce not just here in Aussie, but also overseas in places like the US and Europe.

The first country to work at establishing good organic farms, as well as processing and marketing that doesn’t put price beyond normal people, will enjoy the benefits. The Internet is placing all the negative information on chemical farming right in our homes. The information about cancer rates increasing from 1 in 10 people back in 1930 to now 1 in 2 today will ensure that more and more people will be refusing produce with pesticide residues. No wonder people are searching for organic produce.