You are here: Home / Chemicals / Read the Numbers on Your Fruit 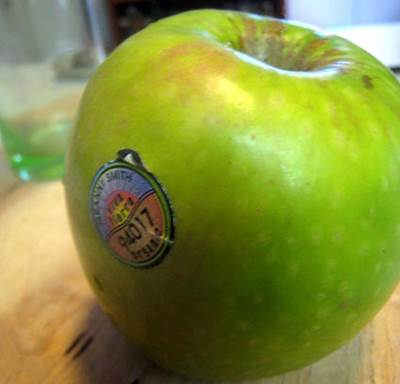 I just found this out about a month ago and I’ve been an organic vegan for over four years, go figure. That just goes to say that we must all remain as students and continue to learn and learn — never stop studying and gaining new information.

Okay, so what did I learn?

I learned that sticker labels (produce codes) on fruits actually tell you how the fruits have been grown — whether they were organically grown or conventionally grown with pesticides and herbicides; oh, and let’s not forget about the genetically engineered fruits. Also, I wondered about the safety of putting those stickers on fruits and found out that though the adhesive used to stick them is edible-safe, the label itself is not. So, you need to peel it off (and wash your produce anyway).

Where is that Label?

These days, you’ll find that fruits like apples and bananas have a small sticker on each one of them. They are also called PLU (Price Look up Code). Apart from the scan-able vertical bars on them, you’ll notice a number also. It is this number that you have to pay attention to, to discover the true grown nature of your produce. If this bunch of fruit is in a bag then that label should be on the bag.

Let’s look at what some of these labels mean:

Produce stickers that have numbers beginning with a 3 or a 4, and the number being four digits long only, indicate that it is a conventionally grown product. Yes, that means it was sprayed with all those pesticides and chemicals that you are trying to wean away from your food.

Now for the sticker that you WANT to see on your produce; this one starts with a number 9 and is five digits long. It tells you that the fruit or produce is grown and raised organically without being treated with any chemicals.

If you are wondering whether your produce is genetically engineered or not, look for the labels that have a number starting with an 8 and is five digits long. Not only has this kind of produce been genetically modified, it might have further been treated with harmful chemicals too! Needless to say, I wouldn’t be recommending to buy this one, if you truly care for your health.

Remember, this is good to know because stores aren’t obligated to tell you if a fruit has been genetically modified (grrr….).

Okay, so if you come across an apple in the store and it’s labeled 4922, it’s an conventional apple grown with herbicides and harmful fertilizers. If it has a sticker 99222, it’s organic and safe to eat. If it says 89222, then RUN!!!! It has been genetically modified (GMO).

So next time you go shopping, remember these critical numbers and know how to avoid purchasing inorganic and GMO fruits.