You are here: Home / Allergy / The Amazing Healing Powers of Black Cumin 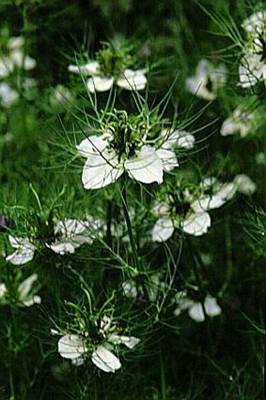 The majority of the English-speaking world is missing out on this powerful medicine! Black cumin, from the plant Nigella sativa, is just starting to make the rounds in the Western world, but this potent healer has been well-known and respected as an all-around remedy in African and Islamic countries for millennia.

Nigella sativa is native to southeast Asia, and it’s also known as karayal, kalonji, fennel flower, nutmeg flower, Roman coriander, blackseed, black caraway, or black onion seed, along with its many names in dialects and tongues. It’s also often confused with another plant, Bunium persicum, which is also called by the name “black cumin” but which has a completely different flavor. The black cumin health benefits abound.

The Nigella sativa plant is humble in appearance – it looks like a small shrub, attaining about a foot’s height and equipping itself with dark, spindly leaves. Eventually the black cumin plant grows a small pale flower. In its native climate, the Nigella sativa plant flowers late in the fall and the seeds – that is, the source of the plant’s healing powers – are available after that, in the early winter.

Black cumin has a rich history – you can tell that just by examining its variety of names. If something has many names in many languages, it most likely has been found to be valuable in those cultures; for example, in Finnish, the plant is called Rohtoneidonkukka, meaning “balm maiden’s flower,” a clear reference to its use as a medicinal plant.

It has reportedly been said that black cumin seeds were found among the remedies in King Tutankhamen’s tomb. As an impressive testament to its healing power, the prophet Muhammed said that black cumin can cure every ailment “except death”! Similarly, Avicenna (Ibn Sina), the great ancient polymath and philosopher, regarded the seed highly as a substance that stimulates the body’s energy and helps it recover from a variety of ailments.

Traditionally, the seeds of the Nigella sativa plant have been administered to treat respiratory ailments (asthma, bronchitis) and inflammatory diseases (like arthritis). It has also been prescribed as a digestive aid and found to be helpful in fighting parasitic infections. Oil extracted from the plant is useful as a topical ointment against boils and skin infections. The health benefits of blackseed are remarkable.

Modern medicine, too, is taking note: the plant contains nigellone, which has been found to protect guinea pigs from bronchial spasms; this could lead to more research to determine the plant’s use in treating asthma and allergies on a long-term basis. It also contains beta-sitosterol, which helps reduce levels of cholesterol in the blood and can be effective against tumors and cancers. Both of these medical benefits are very real, and lend credibility to the black cumin plant’s widespread use as a health aid.

How to Use Black Cumin

To use black cumin, you can either get a hold of the fresh plant or the extract. It is always best to use fresh plants, preferably grown by an herbalist you know and trust; however, it’s not always available. The plant’s healing properties come through in the oil form as well. The oil can be used in many ways as a nutritional supplement by dropping 3-5 drops into tea or juice and consuming.

It’s also good for colds; start by rubbing a small amount of the oil on the chest. For best anti-cold results, combine the oil treatment with an increased consumption of raw onions and garlic. Consider growing some of this fantastic little plant in your own herb garden – considering its potency and variety of use, you’ll be glad you did.