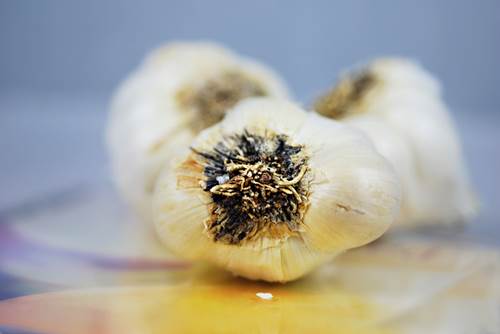 Garlic, a natural antibiotic, is well known for two things: its delicious taste and its exceptionally strong aroma. Garlic has been known to bring on bouts of self-consciousness on dates and prevent people from confidently addressing one another in closed spaces and unventilated rooms. But of all garlic’s effects, among the least well known (and most useful!) is its excellent track record as an antibiotic, antibacterial, and anti-fungal.

History of Garlic as a Natural Remedy

Louis Pasteur first demonstrated garlic’s antibacterial properties in the nineteenth century, though as a remedy, it’s much older than that. Garlic is one of many natural remedies that has been used to treat various ailments from tuberculosis to gangrene since the times of the ancient Greeks. Pliny prescribed it for a multitude of ailments, as later did the medieval medic Galen, who noted its properties as a “rustic’s theriac,” or a general cure-all for the peasant class. Garlic is grown worldwide which may help to explain its long-lasting popularity in both cuisine and herbal healing.

Galen was correct: medically, garlic is extremely useful. It can help lower cholesterol and regulate cardiovascular function, treat infection, and bring up phlegm in the case of a chest cold. If a cold moves into the chest, garlic can help to fight it if combined with other natural treatments, such as vapor or steam, tea, and compresses.

Garlic is an Expectorant

Garlic is most effective as an expectorant when eaten raw, especially with onions, which are also powerful antibacterials with expectorant properties. A recipe for home cough syrup includes several garlic cloves and an onion, chopped and covered in sugar until a juice forms. The juice is then drunk as a cough syrup, and it is said to have a beneficial effect in both fighting the infection and getting rid of its symptoms.

Garlic can also be effective when used as a suppository anally to treat intestinal parasites. It is also helpful internally in cases of yeast infection in women – to administer, wrap a clean garlic clove in clean cheesecloth, tie a string around it, and insert it as a tampon. Alternately, for the squeamish, simply add lots of garlic to the diet to bolster treatment during a yeast infection; garlic will assist in the treatment to clear away the problem.

Chemically, garlic’s antibiotic and anti-fungal effect comes from allicin, a compound that’s synthesized and released as the clove is crushed or chopped – allicin is the plant’s own defense mechanism, originally present to keep outsiders from chewing on the plant itself. When released and consumed, allicin acts as a broad-spectrum, natural antibiotic, so it functions effectively against a variety of infections.

The chances of bacteria developing immunity to this natural antibiotic are low because garlic’s antibiotic properties are natural and non-manufactured. Some have suggested it also has antioxidant properties, making garlic treatment an effective tool in fighting free radicals. All in all, a diet rich in garlic (and its cousins, onion, leek, and chive) may help boost the immune system and fight away infections before they can take root. And a cure for that garlic breath? Try chewing a sprig of parsley after a deliciously odiferous meal to freshen up.

Hands down, Garlic is one of the best natural antibiotics.